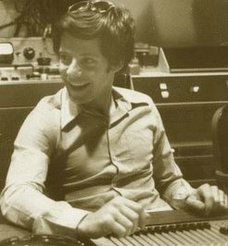 By permission of KENT KOTAL / THE60sSHOP / FORGOTTEN HITS I am posting this interview with Ron Dante this week. To subscribe to FORGOTTEN HITS, which is a great newsletter if you are like me and into music of the 60's, you can e-mail them at The60sShop@aol.com . Here is part four of the series.

Today, (with RON DANTE's help), we'll take a closer look at the career of THE ARCHIES ... as well as perhaps a surprising inside look at THE MONKEES!!!
***
FORGOTTEN HITS: I just sent you a copy of a piece I did on THE ARCHIES a couple of years ago. (It also ran as a '60's FLASHBACK in yesterday's edition of FORGOTTEN HITS.) As an "insider," can you tell me ... is this historically accurate? Are there any corrections or additions that you'd like to make? What can you tell us about the fall-out between TONI WINE and DON KIRSHNER (now that the statutes of limitations has passed LOL!!!) Was RAY STEVENS really involved in these recordings???

RON DANTE: I never saw Ellie Greenwich in the studio and I don't think she was on any of the Archies records. Tony Passalacqua is another name that does not ring a bell. I never sang backgrounds with him either. Robin was not in the studio with us either. Ray Stevens played Tamborine on Sugar, Sugar and did hand claps with Jeff Barry, Toni Wine and myself. Toni stopped recording with The Archies (rightfully so) when no attempt was made to compensate her for all her for all her talented singing. Today she is good friends with Don Kirshner and he's made amends.

FH: Your biggest break, of course, came by way of THE ARCHIES. This, of course, put you working pretty much hand-in-hand with the legendary DON KIRSHNER. Now you had known and worked with KIRSHNER prior to this experience ... what was his actual involvement with THE ARCHIES? Selecting Material? Marketing? Strategy? What were the original goals set for developing this "band" ... do you feel that you achieved these goals? And how did those goals change as time went on (especially after SUGAR, SUGAR was SO big out of the box)?

RD: I knew Don Kirshner from my early days at his publishing company, Aldon Music and from Screen Gems where he was President of the Music Division. Don picked the producer, Jeff Barry, to write and produce The Archies' material. I had worked with Jeff before, also doing background singing for him around that time. Don helped pick the songs but left the arrangements to Jeff totally. The original goal of The Archies was to keep it a cartoon and the keep the voices behind it a mystery. That game plan never changed all through the four years the show was on the air.

FH: KIRSHNER had been around the music business for QUITE some time by 1969. (We also did a month-long feature on BOBBY DARIN a while back, one of KIRSHNER's old Brooklyn buddies ... DARIN used to write jingles with KIRSHNER prior to assembling his ULTRA successful stable of songwriters.) This had to be a VERY frustrating time for DONNIE, coming off having just being fired from THE MONKEES ... especially after making them the BIGGEST group on the planet at the time! (Also, it's been reported for decades now that THE MONKEES turned down SUGAR, SUGAR as being "too bubblegum" for the image they were trying to portray at the time ... I even included this information in my original ARCHIES piece from three years ago ... but I've since heard that this is absolutely not true ... they were never even offered the song. Can you confirm or deny???)

RD: All I know is that Sugar, Sugar was written directly for The Archies. Andy Kim told me of a conversation with Jeff Barry where he asked Andy to write some songs for our group. Kirshner may have played the song for the Monkees, but I doubt it.

FH: Speaking of THE MONKEES ... in 1970 (when the band was down to just a duo of MICKY DOLENZ and DAVY JONES), both ANDY KIM and JEFF BARRY got together to write and produce their (at the time) final album. This had to be right in the thick of all THE ARCHIES stuff that they were involved with. Do you have any memories regarding this period? Were you in any way involved in THE MONKEES' CHANGES album?

RD: I auditioned for the Monkees but was beat out by Davy Jones getting the part. I had produced a few singles on Davy with my Detergent friends Danny Jordan and Tommy Wynn for Colgems Records and knew and liked him. After they became the biggest group in the world, I didn't have any contact with them for many years. I'm friends with Davy and Micky today and perform some Monkees songs as part of my stage act.

FH: Tell us a little bit more about your audition for THE MONKEES ... what was that whole experience like? And then, watching them explode around the world as the biggest thing happening musically on the planet! What early DAVY JONES tracks were you involved with? Were any of your compositions submitted to THE MONKEES for consideration?

RD: I auditioned with hundreds of others in New York. It was a cattle call and I even backed some friends up playing guitar. We all knew this was going to be a hit show since Don Kirshner was doing the music supervision.

FH: When did it first become public knowledge that you were the lead singer for THE ARCHIES?

RD: Two years after the Archies came out, I did a solo album and Kirshner took out tons of ads announcing I was the voice of The Archies.

TODAY'S MUSIC:Bang-Shang-A-Lang by The Archies (#9 in Cash Box Magazine, 1968)...and, I just HAD to ask:
DEALING THE "DIRT":
FORGOTTEN HITS: OK ... This one's just for fun but, at SOME point, SOME of these thoughts just HAD to be going through your head!!! You stress the fact that you and DON KIRSHNER had been friends for a long, long time ... and, obviously, your work with THE ARCHIES made TONS of money for DON KIRSHNER and his record label and publishing company. Yet again, you remained (for the most part, at the time) anonymous. Even though this was always "the deal" ... and you all knew up-front that this was the deal ... did it ever bother you that you were the one doing all the work and HE was the one receiving all the credit for being a musical genius?!?!? Did anybody EVER have ANY idea, in their WILDEST imaginations, that THE ARCHIES could explode the way that they did? Six straight Top 40 Hits ... and The Record Of The Year for SUGAR, SUGAR!!! And what about credibility issues ... I mean your records were being printed on the back of cereal boxes for God's sake!!! Come on ... dish ... didn't any of that start to drive you crazy at the time?!?!?

RON DANTE: Yes to ALL of what you've said. Don make a ton of money while the studio singers and players did not. I certainly wanted the credit for singing the record of the year but it was not to be. Both Don Kirshner and Jeff Barry were hit makers so it did not come as a surprise to me when The Archies became a phenom.

Spoken like a REAL good sport!!! (LOL) Thanks, RON, for putting up with some of our nonsense here today ... and giving us some GREAT insight into the making of THE ARCHIES.