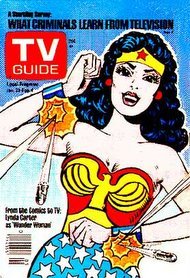 Wonder Woman is the TV series that officially made DC Comics into a TV mogul. It took it’s time in coming to series. In 1974 it was a made for TV movie with Cathy Lee Crosby in the title role. Now she was pretty and very good in the part but it she didn’t look like the book character. Also, it was set in modern times and she hardly ever wore the superhero costume and when she did it didn’t look like the one in the comic book. It looked more like something that an Olympic athlete would wear. It must not have done well in the ratings as it was not rushed into being a series. Of course it didn’t stop them. They did a series of specials by taking it back to the original model. In an interview I read back then, perhaps in the TV Guide issue shown above, network executives said that they wanted to cast someone in the series that could be tough and still feminine. One executive was heard to have said “Great we’re going to cross Godzilla with a dandelion.” Who they cast was Lynda Carter. She looked closer to the comic book version, so close you would have thought that Charles Moulton had her in mind when he created Wonder Woman. They also set the series back in the days of World War II when the comic book series had begun. Also, cast in the part of Steve Trevor was former Carol Burnett show straight man Lyle Waggoner. Like Batman this series had a campy attitude to it but took itself a little bit more serious. Like the Adventures of Superman there was rarely a time when she fought any super powered villains. Usually she fought Nazi spies but on some occasions she did fight super powered aliens.
It didn’t start out as a series. It was first a series of movie specials. On December 18, 1976 it aired on ABC on Saturday at 8pm as a TV series. The ratings for the show were pretty good. Among my circle of friends and relatives who were young teenage history buffs it was a must see since it combined the beautiful Lynda Carter and the WWII atmosphere. Ratings must not have been as good as ABC hoped because the show was not on the air in February and March. It returned in May and ran till July of 1977 on ABC and was canceled. In September of 1977 it returned to the air but on CBS on Friday nights at 8pm. With the new network changes were made. It was set in modern times. Wonder Woman worked for the Government when it was on ABC and she still did when I was on CBS. Lyle Waggoner still played Steve Trevor but he was now Steve Trevor Jr. the son of the Steve Trevor that Wonder Woman knew in the 1940’s. As an Amazon she aged a lot slower then we mere mortals so she looked as young as she did back then. Now ratings must have improved with the changes as it lasted longer on the air. However, the stories seemed even more campy then they were a few months ago. Two things made this complete. First was she had a talking computer named I.R.A. A talking computer was science fiction way back then. Second was that when on ABC Wonder Woman, when dressed as Yeoman Diana Prince, had the thin disguise of wearing glasses. Here on CBS, the tiffany network, she didn’t wear them as Diana Prince. Yet still no one knew she was Wonder Woman. The woman wasn’t even trying to hide it now. Just how smart were these government agents anyway. As you can tell by now I quit watching when it was on CBS. I don’t know many people who did continue to watch but a lot more must have. On ABC the run of the show is measured in months. On CBS it is measured in years. It was on CBS from September 1977 till September 11, 1979. The show made a star out of Lynda Carter. While she never had another hit series she made a good living in the made for TV movies for years. She still appears from time to time as I recently saw her in a movie on the SCI-FI network. After the series Lyle Waggoner eventually found his way to making a living selling mobile homes to studios as dressing rooms for the stars of TV shows and movies.
The above TV Guide is one that I remember delivering to local customers back in the 1970's. It was near the end of my "career" with that company. I kept a copy for years but eventually lost it. It brought back some nice memories when I saw this cover again.