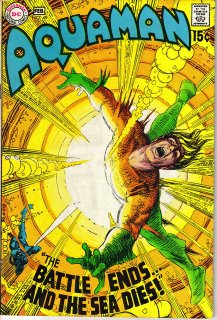 Today I am talking about Aquaman #49 dated February 1970. It is titled “As The Seas Die” It is written by Steve Skeates and edited by Dick Giordano and it is a mystery so while it is easy to figure out I will not reveal the identity of the saboteur in case you want to get it from your local comic book store. What caught my attention is the wonderful artwork on the cover. At first I thought it was by Neal Adams but after I bought it I saw that it was signed by Nick Cardy. The art on the inside by Jim Apro is just as beautiful. I have never quite understood why if you have a great artist like Mr. Apro then why not have him do the cover also. Or have the cover artist like Mr. Cardy do the story inside the book. It seems like false advertising when I buy a book based on the cover art and the art inside is not the same or if the cover has nothing to do with the storyline. Anyway, back to Aquaman.
Someone is blowing up factories that are dumping chemicals into the ocean. The chemicals are causing the local fish to go insane and become aggressive. Luckily it is also making them weaker. Aquaman’s friend Professor Davidson has been looking into the problem and has asked that Aquaman and Aqualad look into the problem.
While Aquaman is away from Atlantis his enemy Ocean Master comes to Atlantis under a white flag. Mera goes out to see what he wants but he will only talk to Aquaman. Mera tries to stall him as she doesn’t want to tell him that Aquaman is away from his kingdom.
During his investigation Aquaman finds that the owner of the last factory destroyed is saying that it was an accident even though Aquaman was there and saw the saboteur escape. Like the other owners he was illegally dumping chemicals and is afraid that the police would find out and arrest him instead. Aquaman later sees the saboteur and follows him to where he returns to the scene of the last crime. The owner is waiting for him. The saboteur gains the upperhand in the battle and looks like he is about to kill him when Aquaman intervenes. Even though Aquaman saved his life the owner knocks him out and leaves him to die because he doesn’t want a witness to him killing the saboteur. The factory owner and the saboteur both die when they fall off a cliff during their fight.
Aquaman meets up with Aqualad who had been working on another part of the investigation. Now that it is all over they decide to go home to get some rest. That of course won’t happen when they meet Ocean Master next issue.
I really enjoyed this story and recommend that you rush to your local comic book shop to buy this book.