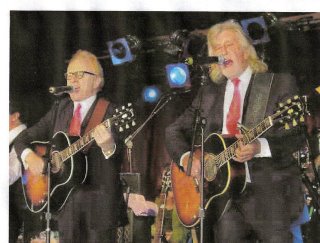 I just saw this on the 60'shop newsletter. I don't think they will mind if I share it with you. If you want to see more stuff like this you can subscribe if you e-mail them at The60sshop@aol.com Now here is the tale of this duo's reunion. Hope you have fun reading it. OK ... we're ALL getting older ... and SOME of us have aged better than others. As we watch our '60's heroes try to keep on keepin' on, we've come to expect the gray hair ... the voices that don't go QUITE as high as they used to ... and the mid-section paunch ... but I can't think of ANY '60's artists that I've EVER seen who've aged as much as THESE two guys have!!! (Well ... MAYBE HOWARD KAYLAN of THE TURTLES!!! lol) Honest to God, they look absolutely ANCIENT!!! The good news is, they've maintained a fair amount of charisma, a good sense of humor and enough of an ability to sing on-key MOST of the time ... and, as such, we really enjoyed seeing PETER AND GORDON perform at BEATLEFEST this past weekend. They performed nearly every Top 40 Hit they had (only KNIGHT IN RUSTY ARMOUR and SUNDAY FOR TEA were missing from the line-up) which includes, of course FOUR LENNON AND McCARTNEY tracks given to the band while PAUL was dating PETER's sister, Actress JANE ASHER. In between, they kept us entertained with humorous anecdotes and, in fact, an earlier question and answer session was MOST enlightening. (After PETER ASHER had spent some time talking about how PAUL McCARTNEY lived at the ASHER family home for a couple of years whenever THE BEATLES were in London ... and even composed several songs ... including the earliest "SCRAMBLED EGGS" version of YESTERDAY there on the premises ... GORDON WALLER then told the audience that his all-time two favorite BEATLES' songs were I'LL FOLLOW THE SUN and THINGS WE SAID TODAY ... and that he asked PAUL if, perhaps, he'd be willing to give THOSE two away for the duo to record. "No," PAUL replied ... "JOHN LIKES these two!!!" (Apparently LENNON didn't think A WORLD WITHOUT LOVE was strong enough for THE BEATLES to record themselves ... so PAUL gave the song to PETER AND GORDON and it immediately went #1 all over the world!!!) They opened their show with my personal P & G favorite, I GO TO PIECES, written by DEL SHANNON. Along the way, they did a VERY nice version of the BUDDY HOLLY tune TRUE LOVE WAYS (ANOTHER favorite of mine), a GREAT live version of LADY GODIVA (which ASHER admitted he HATED when it was first presented to them and felt it would be a HUGE mistake to record the song ... once it became a Top Five worldwide hit, he says, he came to love it!!!) They recreated their "wall of sound" effect for their rendition of PHIL SPECTOR's TO KNOW YOU IS TO LOVE YOU and then closed the show (quite emotionally, I might add) with the PAUL McCARTNEY (or is that BERNARD WEBB???) tune WOMAN, a song VERY near and dear to the hearts of both FRANNIE and myself. GORDON also talked a little bit about the MIKE SMITH Benefit Concert (which first reunited the duo) and said that it would soon be available for purchase on DVD. (PETER AND GORDON then performed THEIR version of THE DAVE CLARK FIVE classic BECAUSE.) Another emotional part of the show was when BREAKFAST WITH THE BEATLES Host MARTIN LEWIS came out and read a telegram from SIR PAUL himself congratulating the duo on reuniting and once again helping to prevent A WORLD WITHOUT LOVE. As we've said SO many times here in FORGOTTEN HITS, this was a GREAT opportunity to see some of the artists who SO shaped our lives while growing up listening to this music. PETER AND GORDON are completing a world tour together and have several other dates scheduled around The United States ... check them out if you can ... you may not get another chance!!! (By the way, PETER ASHER is still quite active "behind the glass", too ... he just finished producing the brand new DIANA ROSS album, which will contain a version of PAUL McCARTNEY's White Album Track I WILL.)