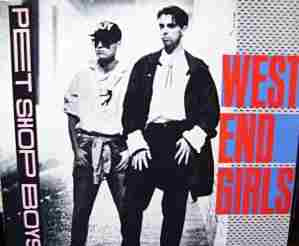 On May 10th, 1986 the song West End Girls by the Pet Shop Boys was the #1 song in the USA on the Billboard charts. Its rise to the top started when Neil Tennant and Chris Lowe met in a stereo store in London, England in 1981. Neil was there because they were making a lead to plug his synthesizer in to his hi-fi system. Chris was there to get a stylus for his record player. They started talking about keyboards and synthesizers and met again a couple of days later at Neil’s house and started writing songs.
Neil had a degree in history, played Cello, had been in a theater group and was part of a rock band called Dust. He had also been an editor for Marvel Comics in their London office. His job with Marvel was to anglicize the dialogue.
Chris had studied architecture and played trombone and piano. He had also been a member of a band called One Under the Eight.
They did some early recordings at Neil’s apartment and at a friend’s studio in Camden. Neil at the time had a day job as editor of the British magazine Smash Hits. In 1983 he was sent to New York to interview the Police. While there he met his favorite producer Bobby Orlando. Mr. Orlando was impressed with him and agreed to produce a session with him and Chris. The session resulted in the first version of West End Girls in 1984. It was a big hit in France and Belgium. While not released in the US, some LA DJ’s got an import and it became a local hit in Los Angeles.
Their relationship with Bobby Orlando went bad. However, due to contract obligations they could not record for another producer for a year. In 1985 they signed with the Parlophone label in Britain. They released a single called Opportunities (Let’s Make Lots of Money). It didn’t.
Next they went into record a new version of West End Girls with producer Stephen Hague. Since most people outside of France and Belgium had not heard it the song would be new to them. It was released in October of 1985 in England and went to #1. Later in May of 1986 it held the same position in America.
At that time they were the third British male duo to top the American Billboard charts in and 18 month period.
The duo had a hard time with the name they chose as they were told it was a New York slang for some sexual innuendo. Neil Tennant said they named themselves after some friends who worked in a pet shop. He said “If it has got that slightly dubious connotation then it’s quite amusing but it’s certainly not deliberate.”
Posted by Rick L. Phillips at 3:01 AM