This Day in Music History: Guy Mitchell and Singing the Blues 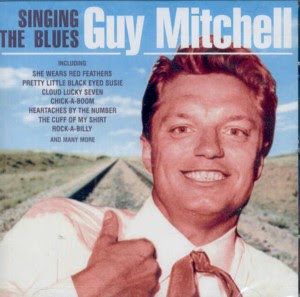 On this day in music history, December 8, 1956, Guy Mitchell had the #1 song on the Billboard charts with Singing the Blues. It was written by Melvin Endsley and produced by Mitch Miller. Melvin was a victim of polio when he was three years old. He was confined to a wheelchair. This was his first successful that he wrote.
Marty Robbins was the first to record the song for Columbia Records. It was the same label that Guy Mitchell recorded for and Mitch Miller was one of their producers/executives.
Before he became Guy Mitchell he was Al Cernick from Detroit, Mich where he was born Feb. 27, 1927. His parents moved to Los Angeles when he was 11 years old. It was during the train ride west that Little Al was heard singing on the train. An Agent heard him and told his Mom her son had a beautiful voice. He gave her his card and told her to call him when they got to LA. She did and the agent got Al signed to a contract with Warner Brothers where they planned to groom him to be a child star. He was given acting, singing, dancing and diction lessons. He was heard singing on radion station KFWB. Then his parents moved to San Francisco and that ended his career as a child star.
He still continued singing and in 1947 he became the vocalist for the Carmen Cavallaro Orchestra. It was with them that he made his first recordings. It was with Decca Records and they were called "I Go in When the Moon Comes Out" and "Ah But It Happens."
His biggest break came years later when Frank Sinatra refused to record two songs for Mitch Miller. The studio was already booked and the band was waiting. Mitch had to find a replacement fast. He remembered hearing a demo for Al Cernick. Two hours later, after making some calls, Mitch had Al in the studio. He recorded "My Heart Cries For You" and the flip side "The Roving Kind." Both made the top 5 on the charts.
Mitch Miller didn't like his name. So he had him change his name. Mitch gave him the name Mitchell and Guy came from Mr. Miller saying that Al was a nice guy. Hence the name Guy Mitchell.
Later Mitchell heard Marty Robbins version of "Singing the Blues" and wanted to record it. He asked Mich Miller if he could record the song. He was given the go ahead. Both versions entered the charts on November 3, 1956. However, Robbins version stalled at #17 while Guy Mitchell's version went to #1 for 9 weeks.