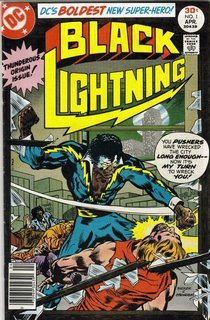 Ok here is one of my favorites from the 70's. Black Lightning! He was part of what DC Comics called the DC Explosion. For those of you who don't read comics or not old enough to know, the DC Explosion was a time when DC released Black Lightning, The Freedom Fighters, Firestorm and I believe the Steve Ditko created Shade the Changing Man. However, the DC Explosion quickly became the DC Implosion as all those comics were quickly canceled due to low sales or slow sales.
Alot of those characters are still around. Just not in thier own books. Black Lightning has had his own series twice. Both got cancelled but for my money the first was the best. The writer of his creator Tony Isabella and the art of Trevor Von Eden (whatever happened to him?) was a great mix. Mr. Isabella has said that an issue of Wonder Woman was important in his creation. He knew that he wanted his secret identity to be school teacher Jefferson Pierce. He knew he wanted him to be fighting crime to help his students in the inner city. So far it sounds like Welcome Back Kotter meets Batman doesn't it? He just didn't know what his abilities should be. Then he saw an issue of Wonder Woman trying to stop a bolt of black lightning from hitting the city. Wham! He called the character Black Lightning and his powers would be electrical. His powers came from a power belt that he wore. What really got me about the costume was that the afro that you see was part of the mask. So basically he was wearing a helmet. To me that was cool. Hey I was only 13 when it came out. He was only around for a handful of issues. Was deamed worthy to keep around by doing a spin off from the Justice League of America with Batman starting a new group called the Outsiders. Got is own series again and it only lasted another handful of issues. Don't give up on him yet DC. He is too good to lose. A little known DC character called Static did well with his cartoon series on TV. Maybe they should do the same with BL. Also do an archive edition. I don't buy too many of those but I would be willing to buy that one. Anyway this is what I had on my mind.