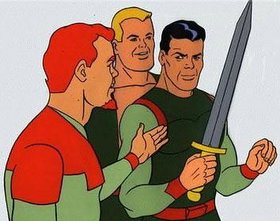 One of the cartoons that brings back fond memories is Rocket Robin Hood. It took place in the year 3000. Rocket Robin Hood was a descendant of the real Robin Hood. Like his ancestor he led a band of Merry Men called Little John, Friar Tuck, Will Scarlet, etc. There were no horses for these band of men. They flew through space from Sherwood Astroid in spaceships and fought with electro-quarterstaffs. They were determined to defeat villains like Prince John, the Sheriff of N.O.T.T. (National Outer-space Terrestrial Territories), Dr. Medulla and the Warlord of Saturn.
The show was produced in Canada between 1966 and 1969. It was produced by the same company that brought Spider-Man to Saturday morning TV in 1967. Jean Mathieson was one of its key animators and was one of the first women animators in the business. One of it’s key directors was the soon to be famous Ralph Bakshi. Bernard Cowan and Paul Kligman did voice overs on both Spider-Man and Rocket Robin Hood. Kligman was the voice of Jonah Jameson in Spider-Man and the voice of Friar Tuck. Ed McNamera and later Len Carlson were the voice of Rocket Robin Hood.
The above photo I got from this fan site.