This Day In Music History: Joe Dowell and Wooden Heart 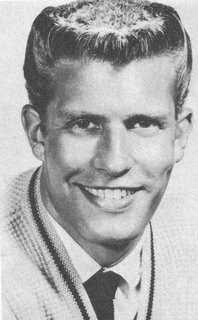 I have a book as I posted earlier that tells of what songs were #1 on the charts called The Billboard Book of #1 Hits. Sometimes I have looked up what the #1 hit song was on the birth date of friends and family members. For today I looked up my birthday. Did I get The Beach Boys, Jan and Dean, Elvis or even a one hit wonder that was so huge that you still know the song to this day? No I got Joe Dowell with his version of Wooden Heart (Muss I Denn). I sort of came close to having an Elvis song as a hit on my birthday as Elvis sang the song in the movie G.I. Blues and it was a hit overseas. That’s Joe pictured above in what looks like it was taken from his high school yearbook. Joe was born in January of 1940 in Bloomington, Indiana but raised in Bloomington, Illinois. Joe learned to play the guitar and sang and wrote his own songs. He made his first public performance in the 9th grade when he preformed in a talent show. He competed in contest while majoring in radio and television at the University of Illinois. With the dream of being on radio he drove to Nashville and rented a room at the YMCA. On his last day he went to see Teddy and Doyle Wilburn who were regulars on the Grand Ole Opry show. They liked him and introduced him to Shelby Singleton Jr. of Mercury Records. He liked Joe’s voice and his all-American boy look. Joe went back to school to finish his studies then returned to Nashville where he recorded songs that were released on Smash Records. He had 3 songs that entered the hot 100 so he is not a one hit wonder. The songs were The Bridge of Love that reached #50, Little Red Rented Rowboat at #23 and his biggest hit Wooden Heart reached #1.
Joe recorded Wooden Heart because his producer Shelby Singleton Jr. had seen the movie G.I. Blues and heard the Elvis version. He noticed that Gus Bacchus had a hit with it in Germany. Elvis had the song I Feel So Bad on the charts already and thought RCA would not release the Elvis version of Wooden Heart. He decided to have Joe cover the song.
Part of the song is in German and Joe had to be taught how to sing the German lyrics and Joe said he didn’t know what he was singing. A tuba and an accordion were used in the original version. To update the sound Jerry Kennedy played the bass guitar for the tuba part and Ray Stevens played an organ to sound like an accordion. Joe was then sent out on a barnstorming tour. It was a good thing too as it turns out that not only had Elvis covered the song but Joe had 4 others who had also recorded the song. With the tour Joe helped to send the song to #1.
Joe completed his education. When his recording career ended he found a new career in writing commercials. He had his own local radio show and wrote jingles for his sponsors. Later he was a spokesperson for financial institutions. When the 80’s came Joe gave up advertising and devoted his time to writing a book and recording songs that he wrote.
You can go to his site by clicking here