Happy Anniversary to Howard the Duck 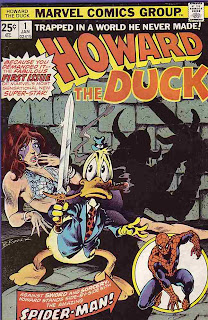 I talked about the 33rd anniversary of Marvel Two-In-One earlier well I should also point out that January of this year is also the 31st anniversary of Howard the Duck #1. He was created by writer Steve Gerber and first appeared in Adventure into Fear #19 in 1973 for Marvel comics. Not long after that he was given a back up feature in Giant Size Man-Thing.
Howard's story starts on another planet called Duckworld. It looks very much like our Earth except that the dominant life forms are ducks that speak english. Howards life is thrown upside down when a power hungry villain named Thog wants to rule every universe. He uses his power to shift the cosmic axis and hoped to collapse them all into one universe under his rule. What it did was drop Howard from Duckworld into ours. He landed in the Florida everglades where he met Man-Thing and his friends. Together they defeated Thog but instead of Howard going home as they planned he fell again and landed in Cleveland, Ohio. There he met and befriended a pretty young lady named Beverly. It was around this time Howrd the Duck proved popular enough to get his own comic book. The series was mostly about how he tried various jobs to fit into this new world and along the way would save the world from minor villains. In many storylines it was a parody of modern science fiction and fantasy stories of the day. The distributors of Marvel comics was accused of making the first issue scarce but buying up and hording the book so that it became a collector's item. The fact was hinted at in one of Stan Lee's Soapbox articles that you can read here. If this was really done or if it was done on purpose I can't say for certain but the allegations were there. It seemed like almost over night the price of the book went from twenty five cents to ten dollars if you could find the book. What really helped its popularity was when they ran Howard for President for the All Night Party. Every where you looked you saw stickers and buttons of Howard the Duck for President. He lost to Jimmy Carter. The book was so popular that it spawned a newspaper strip and later George Lucas and Universal produced a big budget film called...Howard the Duck. It was a huge flop. George Lucas and the stars, Lea Thompson, Jeffrey Jones, Tim Robbins and Chip Zein as the voice of Howard, would like us all to forget. But we will never forget people. How could we forget THAT movie? Howard the Duck the movie also taught me a lesson. How your mentality of seeing a movie at midnight is completly different then at 3pm. I saw the film at a midnight show the first time. I really enjoyed it. When it came out on VHS I rented it and watched it at 3 in the afternoon. The movie was lousy. I couldn't wait to get it back to the rental store.
Howard the Duck is one of the early characters who brought to light the problems with character creations in the comic book industry. Steve Gerber has had a long battle with Marvel comics over his character. It resulted in Mr. Gerber being taken off the book. While the book was published for a few issues more many major industry artist like Jack Kirby and Gene Colon sided with Gerber. They produced some parody comics like Destroyer Duck to get Gerbers side of the story told. With Gerbers vision of the character gone Howard the Duck was eventually canceled. It was brought back a couple of times since, one with Gerber as the writer, and the character as appeared in other books over the years but all had mixed results. The original series ended in 1979 with issue #31 but in the 1980's Marvel put out issues 32 and 33. More recentlty Howard showed up in a Civil War mini-series tie in. It was there that Howard found out that the Government took a stand that Howard didn't exist. He had caused them so much headaches that decided to ignore him. He was very pleased as this ment that he would not have to pay taxes or anything else.
Posted by Rick L. Phillips at 3:03 AM