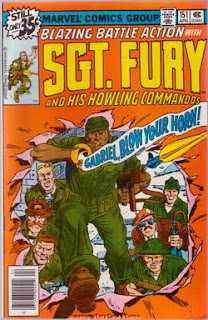 I have concentrated so much attention on the superheroes for black history month that these next two days I will showcase two non-superheroes from the comic books. First is Gabe Jones. He was created by Stan Lee and Jack Kirby as part of Sgt. Fury and his Howling Commandos. His first appearance was in 1963 in an issue of Sgt. Fury and his Howling Commandos #1. While Gabe was a trained and skilled fighter with this elite commando squad he had another skill. He was a musician and with his trumpet he called the Howlers to battle. After WWII ended Nick Fury was asked to head up the spy organization S.H.I.E.L.D. Gabe was one of the Howlers who Fury asked to join S.H.I.E.L.D. The character has appeared in a number of Marvel books as a special government agent. He retired for awhile but returned as a trainer for young S.H.I.E.L.D. recruits. He has also appeared in the Incredible Hulk animated series. He was a S.H.I.E.L.D. agent assigned to work with the Hulkbusters under General Thunderbolt Ross. The character also appeared in a live action TV movie called Nick Fury Agent of S.H.I.E.L.D. It was a pilot for a possible series that never came about and starred David Hasselhoff as Nick Fury.
Posted by Rick L. Phillips at 3:01 AM