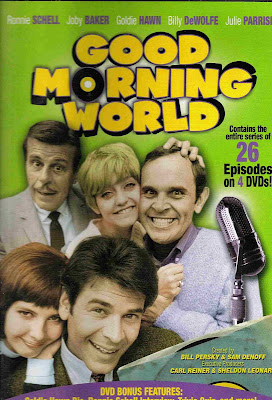 One of my favorite TV flops, and we all have them shows that that should have been hits but were not, is the 1967 series “Good Morning World.” It featured Joby Baker and Julie Parrish as a young married couple in Los Angeles. Joby is David Lewis an early morning DJ on the popular radio show Lewis and Clark. Clark is Larry Clark played by Ronnie Schell. Larry is a confirmed bachelor but mostly dates the loveable, daffy neighbor Sandy played by Goldie Hawn in her first series. I know it was her next series, “Rowan and Martin’s Laugh-In”, in 1968 and her Oscar win in “Cactus Flower” that brought her more fame but it was really “Good Morning World” that started her on the road to superstardom. The great Billy DeWolfe plays Dave and Larry’s boss at the radio station. Billy DeWolfe is a scene stealer without trying. He is that good. In one episode he gets a laugh just by asking the question “Having a drink of water?” Why is that funny? Because it is asked in Billy DeWolfe’s style.
When I first viewed this DVD set I didn’t remember seeing Mr. Baker or Miss. Parrish in anything. Once I saw the first episode I remembered Mr. Baker from a couple of episodes of the Dick Van Dyke Show. The extras fill you in on what the others have done but really as they were either famous before the series or after you pretty much know what they had been up to. I was surprised that the series reminded me so mush of the Dick Van Dyke Show as I watched the first episode. Then I noticed the names behind the scene. It was created by Bill Persky and Sam Denoff who were writers on the Dick Van Dyke Show and the executive producers were Carl Reiner and Sheldon Leonard who created and produced the Dick Van Dyke Show.
The series was innovative with its opening sequence using real photographs and sort of pastels to tell how the earl morning DJ starts the day. The whole series was very funny but the funniest in my opinion was when Sandy misunderstood Larry and she asked him to marry her. Surprised Larry said yes when he meant no. The rest of the episode was Larry trying to get out of it by telling her that he only a few months to live so he can’t get married. Everyone thinks he is dying so to get out of it he says that a cure was recently found and he is taking it. Sandy tells Mrs. Lewis that she figured out it was really that Larry didn’t want to get married but “I’ve got a good thing going on up there.”
In an extra that is an interview with Ronnie Schell we find the answer to something that I have always wondered. Why did he leave “Gomer Pyle USMC”? He played Duke on the show and it was a top ten hit. He left because he was to be one of the stars of this show and since it was created by those who did the Dick Van Dyke Show he thought it might be a big hit. The show flopped because it was on against the Tuesday Night Movie of the Week. Its ratings never put it in the top so the show was canceled and he was able to get his job back on Gomer Pyle and got more money when he came back. This is a very funny series and if I can find where you can buy it on line I will put a link to it on this site
Posted by Rick L. Phillips at 10:19 AM