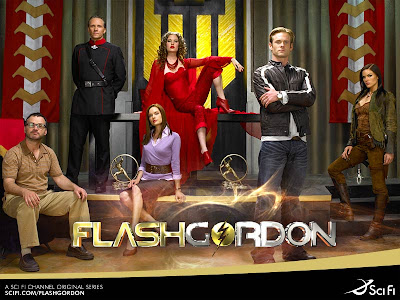 Well tonight is the second episode of the new TV series Flash Gordon. I really wanted to see this series but was busy at the time so I taped it and just watched it this morning. Maybe it is because I am older but this Flash wasn't to my liking. I watched the old serial that had Buster Crabbe as Flash. It was of course in black and white with little humor but lots of action. Years later in the 1980's Flash was back in all his campy glory with Sam Jones in the role. There was more humor this time with lots of action. While some didn't care for it I loved it. It was light and breezy fun. With it now being in color and a name like Flash there were lots of things colored in red and yellow. Mostly Flash in his red shirt and blond hair. Dale Arden was played by the lovely and beautiful Melody Anderson and the rest of the cast was Max Von Sydow as Ming, Topol as Dr. Zarkov, Ornella Muti as Princess Aura and Timothy Dalton as Prince Barin. If you get the DVD you should have alot of fun watching it.
The new Flash seems to think it is in black and white again. Oh yes it is in color but most of the scenes are lit so dull that you hardly notice the color. The above picture is a perfect example of what you will see. Not the bright and blazing colors that I expected and hoped for. The plot just plodded along and seem to take its time getting to each plot point. Casting seemed pretty good espically with the lead as Flash. They said the lines well but they just didn't make me care. These days the viewer has a lot competting for his attention and other things at home seemed more interesting to do then watch Flash Gordon. Maybe I'll just get out the old Buster Crabbe serials and watch them instead. Anyway this is just my two cents on Flash Gordon.
Posted by Rick L. Phillips at 7:21 PM

Part of the reason why those Crabbe serials endure so well is that they are really quite good -- Flash Gordon Conquers The Universe is not only one of the best serials ever made, but it's pretty darn good for the era it was made in. (The fact that they are in the public domain and thus easily available is nice too.)

I didn't catch the new series, as I haven't had much time for new shows as of late. The new Bionic Woman looks equally ujnder-whelming to me.

I want to see the new Bionic Woman too. I may be disappointed but I am hoping for the best. I think it is funny that the original BW was a spin off and it is getting a remake but not the Six Million Dollar Man that it was spun off from.