There Is No Life On Mars 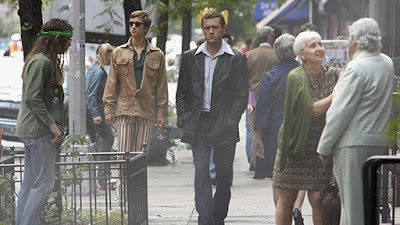 I just read in TV Guide that my favorite new show this season, Life On Mars, has been cancelled. The show is about policeman Sam Tyler who has an accident in 2008 and wakes up in 1973. Now he tries to find out why he is there and how he can get back to 2008. The cancellation is sad to me as the American version is one that I made sure that I was at home to watch or tape and on rare times watch on line. The show itself was very good and it had a great soundtrack. I hope they will release a soundtrack album. It has been a long time since I heard songs by Elton John, Ringo Starr, David Bowie etc. sometimes all on the same episode. My favorite came with episode #12 in the show titled "The Simple Secret of the Note in Us All." In the opening scene they use the song "It Don't Come Easy" by Ringo Starr. Harvey Keitel's character Gene Hunt comes around the corner and that image with the song just seemed so cool. Ringo should be very happy with that video on ABC for his song. If you want to see it or any episode you can click here for the full player on ABC.com
Posted by Rick L. Phillips at 3:48 PM

I didn't like it at all. I'll grant you the series suffered most by comparison to the original. The American version was more heavy-handed and winking. Worst of all, the absolutely marvelous chemistry between the stars in the BBC original was non-existant in the US version. I hear Harvey was excellent but I couldn't stick around long enough to find out. Sorry your show was cancelled, though.