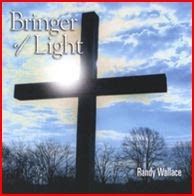 I have an old College friend, Randy Wallace, who is the Pastor at Oak Ridge Baptist. Most of his life Randy liked to write and record his own music. I ran into him the other day and he told me that he is still doing it and his most recent album is Bringer of Light. Well I have listened to it and it is great. The music is positive adn uplifiting just like Randy himself. The cover is seen above in the screen capture. You can buy the CD and hear previews of some of the songs if you go to his record company site CDbaby.com.
Here what it says on the album notes. Many diverse styles are covered on this CD, ranging from Modern Country to Traditional Southern Gospel to Easy Listening and even Light Rock...but, beyond the styles is the optimistic message of hope and joy that are always evident in Randy's live performances.
This is Randy's fifth recording, and among his best. His first album, "Deliver the Young Musician," was mentioned in the book, "Vintage Vinyl:A Decade of Jesus Music," by Ken Scott.
Writing, singing, and playing about everyday things and situations and their deeper dimensions has always been Randy's forte, and in this collection of songs both old and new, it comes to the front once again. From the song for his wife ("Unvoiced Tribute") to his tribute to his parents ("The Moral"); from the contemporary Gospel feel of "His Hand" and the Van Morrison-like "God's Got a Hold on Me;" and the Jimmy Buffett-style "Believe in Yourself," all the way to the uptempo bluegrass "Gerald Brock Hill," this highly anticipated release will brighten your day and touch your heart.
Posted by Rick L. Phillips at 12:35 PM