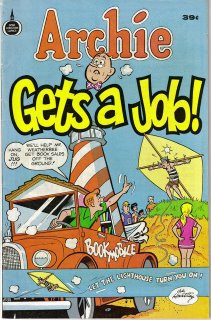 One type of comic book that sometimes I have on my mind are the Christian comic books. It's only natural since I am a Christian and have a love for comic books. Usually they are just comic book versions of stories from the Bible. That's great. However, one man set himself apart. Actually it was God who did that for him. That man was Al Hartley. He did this by writting and drawing stories that people could relate to in the modern day. Along the way the story would give you a Bible lesson. He gave you Christian biographies of Tom Landry, Johhny Cash, David WIlkerson and more. His most important contribution to the field was being able to bring Archie Andrews and the whole Riverdale gang into the Christian comic book field. That was how God had planned it.
Al Hartley, like all of us, was not always a Christian. He was making a living drawing romance and humor stories in the 50's. Then in the 60's the superhero boom came. Most of Mr. Hartley's work was comming from Marvel and Stan Lee tried to use him on some of the superhero books they published. He did one for Thor as an artist then wrote a story for the Wasp and another one for Iron Man. But his best work was in the humor and romance areas. His books were selling very well in those areas. One strip that he drew was called Pussycat. It was for a men's magazine that Martin Goodman published. Mr. Goodman also published the Marvel comic line of books. When Mr. Hartley went to him and told him that he had become a Christian and didn't think he could do Pussycat anymore Mr. Goodman did not make him continue on the strip. However, he also took away all the other assignments Mr. Hartley had at Marvel.
For the first time Al Hartley was out of work. But not for long. Out of the blue he got a call to draw for Archie comics. Rarely has there been a better fit of character and creator. However, it didn't stop there. When Mr. Hartley was going to start producing Christian comics he asked the creators and owners of Archie if he could use their charactors. Since they were of the Jewish faith he didn't think they would allow him to use them. To his surprise they did. God used Al Hartley and his talent to get the word of God to alot of people in a most entertaining way. I have read that he prayed over every page that God would use it to reach others. His career was controled by God and he thanked Him for it every day with his artwork. Mr. Hartley left behind a wonderful legacy and it continues to this day with his comics and his family. Whenever I go to my local comic book shop I sometimes find one of his books in the $1 bin. I am already a Christian so instead of buying it for myself I leave it there. That way there is a chance that someone who likes Archie comics and is not a Christian will buy the book and hopefully something about it will speak to their heart. So if you see one of his books and don't know a non-Christian to give it to then leave it for someone else. But, if you do know someone who likes comics and is not a Christian, get it for them as a gift. Hopefully one day they will thank you for it when you both are in Heaven.
If you want to know more about Al Hartley then go to this page. http://members.aol.com/christiancomics1/Hartley.html There is more to his story.