The Harlem Globetrotters by George Vecsey 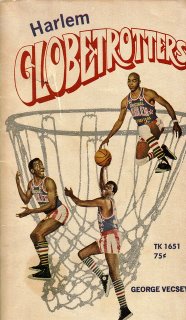 Going through some old books today I came across this book about the Harlem Globetrotters from Scholastic Book services. I got this back in 1971 when I was in elementary school. I use to be a huge Globetrotters fan. Not many people may know that the Trotters were started by a Jewish man named Abe Saperstein. When he started the team they were not suppose to be the clown princes of the court. They were a serious team. Over the years they had to fight racial prejudices. They did their tricks for crowds during their warm ups. After awhile due to the wars that America was involved in like World War II or the Korean War they had to replace some players. During WWII their were white players on the team. In the 50’s with players taken to fight in Korea they started relying on the tricks to become the clowns of basketball. The Trotters have never had trouble attracting first rate players such as Bill Russell and Kareem Abdul Jaber who played under his real name of Lew Alcindor. While they have been able to attract top players, they have not always had an easy time with them. Mostly it was when the players tried to transition from the Globetrotters style to the regular style of basketball. With self discipline they did make the transition and became the great players of their generation. The book says that another player had problems with Meadowlark Lemmon’s clowning. The author of the book, George Vecsey, does not give the players name. He just calls him Smith. When Smith was suppose to give Lemmon the ball to do his trick Smith would take it away from him. Soon there were hard feelings between the two men. One night, at a game in Ohio, Meadowlark had enough and pushed Smith down. When Smith got up he was ready to hit Meadowlark. The Ref, who normally has little to do at a Trotters game then to be the straight man, had to throw Meadowlark out of the game. Everyone was nervous that the fans would riot as he was the fan favorite on the team. However, the fans laughed thinking it was part of a new act. They were still laughing as he gathered his stuff and left the court.
When I saw the Globetrotters on TV I loved them. Curly Neal became my favorite. He was the first person I saw spin a basketball on one finger. I have tried for years to do this but have never mastered it. My 13 year old cousin Josh Hall has shown me that he can do it fairly well. He is one up on me with that one. One day I saw that they were coming to Cincinnati Gardens to play. That was not very far and I asked Mom and Dad to get tickets. They did and it is a bittersweet memory. I was the hit of my class when I came in the next day to tell of my experience at seeing my favorite basketball team play. What I didn’t say was that the Trotters seem better on television then when you see them for real. I don’t know why. They do the same tricks but they come off better when it is on TV. I have seen them play at least 3 times when they came to my area and have not enjoyed it as much as when I saw them on television. If I ever see they are going to be on ESPN or perhaps on Comedy Central I will tune them in till then I have seen my last Harlem Globetrotters game.

I'm watching the "Itis" episode of the Boondocks, Season 1, and Meadowlark Lemon was mentioned. I never knew who this was, so thanks for your post!