My Two Cents: Deck the Halls 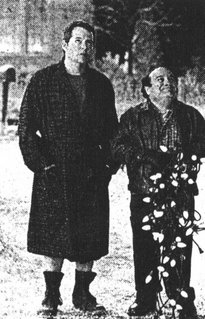 Well Christmas is almost here and Hollywood is giving us as many Christmas movies as we can handle. To the best of my memory I only recall one Christmas movie per year in the past. So for this year there seems to be four. This seems to me like a major break through. Those movies are the Santa Clause 3, Deck the Halls, Unaccompanied Minors and The Nativity. Today I am giving my two cents on Deck the Halls. I really liked this film. Now the plot was predictable but its heart was in the right place and it had one of my favorite types of comedy. Slapstick! I may be a bit over protective when it comes to what kids see on the screen but a couple parts of it I would have rated PG-18. For most the PG rating is appropriate. Matthew Broderick is Steve Finch and is the local eye doctor in town. He is so organized about Christmas and is love for the holiday is well known in town. So he is the citizen who always puts together the towns Christmas activities. Buddy Hall is played by Danny DeVito. The Hall family moves to town when they lease the house across the street from the Finch family. While both men share the star roles, it is Mr. DeVito who is the star in the old Hollywood style. That style is if an actor’s character is mentioned in the title then that actor is the star of the film. So Mr. DeVito is the star as Mr. Broderick’s character gets angry at them and wants to Deck the Halls.
Buddy Hall moves to town to take a new job as a car salesman. He is a great salesman but can’t keep a job as he is still searching for something to fulfill his life. He wants recognition that he doesn’t feel he is getting at his job or at home. When his two daughters find a site that shows what everybody’s home looks like from space but they can’t find their own home it adds to his feeling of being invisible. He decides to do something about it. He wants to light his home so it can be seen from space. He does it so well that it makes the news and the town starts thinking of him as Mr. Christmas instead of Steve Finch. Steve Finch’s reaction to this is beautiful and very funny. Buddy gets back at him by having the lights and loud music stay on till 4am. Now Steve can’t get any sleep. He strikes back by buying fireworks and shoots them at Buddy’s home. However, one gets away from Finch and goes down his chimney. He does more damage to his home then to Buddy’s. In the end both men see that their fighting is hurting both families and they try to be friends.
Does Buddy ever get his house seen from space? Buy a ticket and see the movie to find out. You won’t be disappointed. This is one movie that is worth the price of the ticket. You can’t say that about most movies these days.
Posted by Rick L. Phillips at 6:06 PM