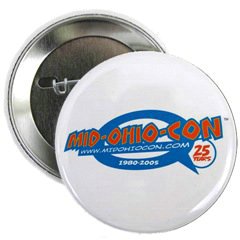 Well overall I had an enjoyable experience at the convention. It took awhile to get there as the directions from the site were just lousy. I followed the directions as they said by taking exit 101A and as they stated it got me on I-270. BUT IN THE WRONG DIRECTION! We turned around and then started looking for another exit that was in their directions. We didn't need to take that exit. By the time we figured it out we were almost there. Once we got there my wife went in with me for about 5 minutes then went window shopping at the mall. I had a fine time briefly meeting celebraties like Tom DeFalco, Peter David, the Funky Winkerbean creator himself Tom Batiuk and Steve Englehart. My wife came back in time to meet Mr. Englehart and he allowed us to take his picture. I will share that with you soon. One person that I wanted to meet was Tony Isabella. I wanted him to sign my Black Lightning #1 and tell him how much I enjoyed the character that he created. But it was so crowded and busy that I couldn't find him. I was embarrased to say that I didn't have anything of Mr. DeFalco's work when I met him. He half kidded me and said to go check any of the 25 cent bins here. That's where you'll find mine. He looked a bit hurt when the first thing that I mentioned I remembered him doing was Solo Avengers. He immediately mentioned more recent work like Spider-Girl of Marvel and Kahn of Moonstone. If you are reading this Mr. DeFalco I hope I did not hurt you. I am a fan of your recent work but Solo Avengers is one that I have loved from younger days. I liked your work in it. So that was the first book that came to my mind. I didn't know what to say to Mr. Peter David. He signed my alternate version cover of Friendly Neighborhood Spider-Man #1. The look on his face was like it was the first time that he had seen the cover. Guess I should have asked him. Every single one of the gentlemen I met were very nice and gracious. I met Tom Batiuk on my first trip to the Con years ago. My impression of him has not changed. If you look up the word Gentleman in the dictionary you will find his photo. He just didn't seem to like that Funky Winkerbean isn't in the papers in Cincinnati. If you are reading this and work for the Post or the Enquirer can you please take care of that.
I stopped by the Moonstone table on my way out and bought their new book Kolchak:The Night Stalker Chronicles. It is a book of various short stories of our favorite paranormal investigator/reporter by various writers. It as an introduction by Frank Spotnitz the executive producer of the new series. Stories by Peter David, Mike W. Barr, Max Allan Collins, Steven Grant, Chuck Dixon, Gary Phillips (no relation) and more are in this volume. You get all that at a very reasonable price. I told the gentleman at Moonstone that I ran this site. He said he would check it out. In hopes that he does I will be taking some of my stories and reposting them closer to the top of the site. Just letting you know so you won't think you have the wrong page loaded. Consider it the bst of On My Mind. Who knows I may have a story in the Night Stalker Chronicles volume two. So I had a good time at the convention. But next time if I need directions I will ask Triple A.