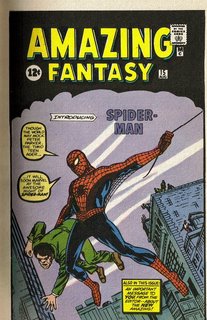 I remember it like it was yesterday. But it was 6 years ago. It was 1962 on a Friday afternoon and my friend Jerry and I were walking home from school. We had just made our usual Friday after school stop at the drug store. There we each bought a comic book and a candy bar. Jerry always bought an Archie comics and Hershey bar. Sometimes I bought an Archie comic but usually I bought Superman or Batman with a Snickers bar. Recently other super heroes started appearing on the stand. Not long ago I started reading a book called Fantastic Four. As good as that one was I spotted a new one that day that excited me even more. The hero was swinging over the city streets. His muscles bulging as he carried the scared villain in his arm. In his red and blue suit covered with webs I was getting my first look at the Amazing Spider-Man on the cover of Amazing Fantasy #15.
When we got to my house our candy bars were already gone. We sat on the front porch and read our comics. As it became our tradition when we both were done we traded and read the others book. Now Archie and the gang can always make me laugh. Today it didn't. I just couldn't get my mind off of Spider-Man. Those wonderful powers of his and sadly how he could have prevented his Uncle Ben from dying but didn't. Was it really his fault. He didn't have to stop that burglar. But if he did he would have not only captured a robber but made sure that a future robbery and murder didn't happen. He would have saved his Uncle's life without knowing it. Spider-Man would have been a hero. Instead the policeman thought he was a jerk. When Jerry was done he gave me the book back. Jerry was like me. A kid with a wild imagination and excited about what he just read.

"Wow! That was a great story."

"He has powers that I have never thought of a super hero having."

"I know Batman is your favorite but even he can't climb walls without a rope."

It was Friday and, unlike most kids in our neighborhood, Jerry and I liked to get our homework done that night. That way we had the whole weekend to play and not worry if we would get done on time. So we said our good-byes. I went in and did my homework. Then we ate dinner. It was still light outside. So I asked Mom if I could call Jerry and see if he could meet me across the street to play in the park. She said it was ok. I only heard the phone ring once when he picked up the phone. He had just finished his dinner and was about to call and ask me the same thing.
A few minutes later we were in the park playing Spider-Man on the monkey bars. Well I was playing Spider-Man. Jerry was playing Batman trying to prove that he could beat me. Which he couldn't. The monkey bars was a warehouse where we did our battle. The winner of the first ever battle/team-up with Batman and Spider-Man has never been resolved. It never will be. But we had fun. Out of breath we sat on a bench and talked.

"You know there is a burglar in this area?"

"My Dad. He said that the Smiths up the street came home from work on Wednesday and all their furniture was gone."

"Didn't anybody see anything?"

"Most of them were at work too."

It was getting dark so we said good-bye again for the second time that day. The rest of the weekend was pretty normal. Saturday morning I watched cartoons. Then it was outside to play with Jerry. Sunday morning I was in my best suit and went to church. Then after lunch I quickly changed and met Jer at the park. Monday was different. It was an in service day at school. I didn't really know what an in service day was but I knew I didn't have to go to school. My Mom only worked part-time but she was off work that day. She said it was ok if I wanted to play with Jerry but be back in time for lunch. When I got to his house I found out that he couldn't play. His Mom didn't work out side the house. She was usually at home by herself while her husband was at work and Jerry was at school. She said she wanted to spend time with Jer. That could only mean she was taking him clothes shopping. I missed him but I was perfectly happy to ride my bike by myself as long as I didn't have to go clothes shopping.
As I rode my bike I stayed pretty close to Jerry's house. Just riding around the block. As I did I noticed a moving van with two men carrying furniture out of the house. At first I didn't think about it. Then I remembered that those people only moved in about 2 months ago. So I kept my eye on them. The people who lived there didn't have kids. If they did I hadn't met them yet. Wouldn't their kids be outside playing today if they had any? Maybe they were inside packing. Then I realized there was no car in the drive way. There was always a blue car in the drive way when they were home. This was beginning to look very odd to me. When I came around the corner again I notice the van starting to drive away.
What should I do? I don't know if these men were stealing, but if they were I can't let them get away. But there are no phone booths here and no one at home. By the time I could get home and tell Mom they'll be gone. I remembered how Spider-Man let the burglar get away and then he killed Uncle Ben. If these guys are the crooks I can't let them get away. They may come and steal our stuff and may kill my Mom or Dad. So I decided to do the only thing I could. I rode my bike as hard as I could and followed them.
I rode for what seemed like hours. I thought I had lost them. My legs were ready to give out when just as I turned the corner I saw the van. It was parked outside a warehouse. I set my bike down quietly. Softly I approached the van. I looked in the back window. I saw a couch, chairs and tables. Lucky me the drivers were inside the warehouse. The door was opened just a crack and I could hear them talking.

"This is the best idea we have ever had."

"Yeah robbing during the day when most of them are at work."

"If anyone does see us they just think that the people are moving."

"This is the first day job I've ever had."

I had heard enough. I went to the phone booth across the street and called the police. It was not easy convincing the dispatcher that I wasn't joking. But she seem to believe me when I told her where I lived and how far I rode to this warehouse on Industrial Drive. She sent two squad cars. When the police showed up it seemed a bit strange. They didn't have their sirens on. I told them what I knew. They checked on the van and found out it was reported stolen. They put me in the back seat of one of the cars and got on the horn and told them to come out with their hands in the air. I just thought they would do what the police said. But they started firing. Suddenly the firing stopped and the men came out with their hands in the air. They could have saved everyone trouble if they did that in the first place.
All that happened very early because when the Police took me home it was noon. I was home in time for lunch. Mom didn't know she needed to be worried about me. When the Police told her I solved the burglary case she was so proud. Later that night when the news reported the early morning gun battle she grounded me for a week.
I had to go to court and tell them what I saw and did. The men went to jail for 15 years and all the families got their furniture back. The papers said it was all because of me.
Like I said that was 6 years ago. It's 1968 now. I'm 16 and driving. I want to ask this girl from my history class out on a date. Girls don't date guys who read comic books. I don't need a comic book to remind me how proud I am of that moment and how it showed me the strength and courage I have in me. My memories will last a life time. Comic books won't. At one time I was so proud of my collection that I branded them by writing my name on the front page in the lower left hand corner. So it is with pain and sorrow that I throw my comic book collection to the garbage. After all they aren't really worth anything. Are they?

Rick i liked your story , it was very good.