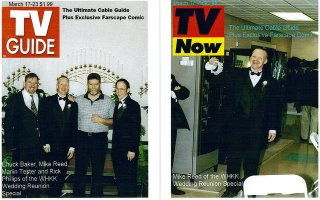 TVN: What did you do after the show left the air?

RP: Well we went off in spring of 1985. By the fall of 1985 I had another syndicated show on that I produced and it starred my three cousins and I. It was called Bachelor Party. It only lasted 2 years. By the fall of 1987 I produced 2 other shows. One was a kids show starring my cousin Randy Blankenship called Randy and Friends. The other was starring my cousin Steve Thompson called Me, Myself and I. Randy and Friends ran for 2 years. Me, Myself and I ran for 1 year.

TVN: What happened after that?

RP: Well I kept looking for other shows to produce but couldn’t find any I could sink my teeth into. So I did guest spots on other shows. Then I was asked to produce the WHKK Reunion movie.

TVN: I already know the answer to this but for the sake of our readers who don’t who asked you?

RP: It was PAX TV. The were in the middle of getting the rights to air the reruns and thought that a reunion movie would be nice to have also.

TVN: What gave you the idea to have the movie about a wedding?

RP: Well a lot of the stories on the show dealt with our adventures in dating. I thought our audience should finally see one of the characters getting married. After all what brings old friends together more then a wedding? Well funerals do but I didn’t want anyone of us dying.

TVN: You and your wife wrote the script. What gave you the idea for the plot?

RP: It was pretty much what happened when we got married. Having to find a Church, setting a date etc. The typical wedding stuff.

TVN: What kind of stuff?

RP: Well like we had a hard time setting the date. We finally settled on May. Then when we went to check the date with the church May was all booked up. We went through their calendar and found that March 17th was open. We didn’t know why but we took that date. Then we were reminded that was St. Patrick’s Day. Neither of us celebrated it but when I told her the groomsmen should be in green tux’s she said she didn’t think that was a good idea. Then there was a big storm and the church suffered so much damage that it was unsafe to hold services at the church. It was too late to get another church. The one part of the church that didn’t suffer any damage was the church Gym. So the wedding was held in the Gym.

TVN: The part of the bride was played by your real wife wasn’t it?

RP: Yes! Now most of the movie was scripted but we put a little bit of reality in it as we were actually married on that day.

Continued and concluded in part 5