Happy Anniversary to Glenn A. Baker and Monkeemania 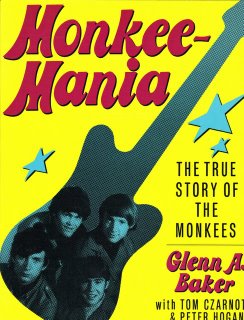 For those of you who can do math I must apologize. I recently posted that this year was the 26th anniversary of the publication The Monkees Tale. I have corrected that post as last year was the 20th anniversary making this it's 21st anniversary. However, I am on time to wish Glenn A. Baker happy 2oth anniversary on the publication of his book Monkeemania. This was one of the first publications on the Monkees from a major publishing house. It was published by St. Martin's Press in 1986. Other previous publications were by teen magazines or by fans who interviewed the pre-fab four. Mr. Baker works in the music industry. At the time, according to the back of the book, he was Billboard magazine's Australian editor and was responsible for the Monkees Greatest Hits album. Now remember the Monkees were considered a passing fad after the show left the air in 1968. Perhaps the reason it was published on cheap paper and has no color photos was to keep cost down in case the Monkees were just a fad again. They could have done better on the publishing. A fad doesn't keep coming back stronger then ever each time and with more fans then before. The book seems more complete to me then any other as it tells you about the fans overseas in Japan and Australia. It also has a complete discography telling about their records release in the USA and other countries as well as the repressing. Also included are recordings they did before and after the Monkees along with the art for many of the overseas picture sleeves of the 45's.
Other books on the Monkees followed. Some autobiographies by Davy and Micky. A biography of Mike Nesmith called Total Control is a more recent release. Mr. Nesmith himself is a published author with his non-Monkees fiction book titled "The Long Sandy Hair of Neftoon Zamora." The only one so far not to have a book out is Peter Tork. Hey Pete you should put out an autobiography or something. If you want me to ghost write it drop me an e-mail or get the two men who helped Mr. Baker with this book.