The 30th Anniversary of the Battle of the Century 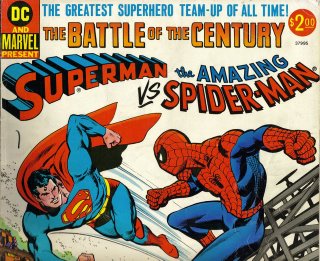 As the title says this year is the 30th anniversary of the meeting of DC Comic's Superman and Marvel's Amazing Spider-Man. Up till 1976 DC heroes only teamed up with DC and Marvel heroes only teamed with other Marvel heroes. Fans for years have wondered why they didn't ever cross over and meet. Finally in 1976 Stan Lee and Marvel along with Carmine Infantino and DC over came any differences there were and realize the potential profits that would benefit both companies if their two most popular characters met. Of course there was the combined threat of Luthor and Dr. Octopus who had teamed up to get revenge on Supes and Spidey. A convention took place in New York where reporters from all over met. So Clark Kent and the staff of the Daily Planet met Peter Parker and the staff of the Daily Bugle. Lois and Mary Jane are kidnaped to get our heroes attentions. Of course all's well that ends well as the bad guys are caught and the heroes in their civilian id's take the woman they love out to dinner.
This was the answer to a comic book fans dreams. Since that time Marvel and DC have teamed up more often. No matter how well written and drawn the story is they all pale in comparsion to the first time. I remember this meeting fondly. At the time most comic books sold for about 25 cents. I almost passed up this book because I couldn't afford the $2 price tag. Finally I decided it was worth the extra $1.75 and have never been sorry that I bought it. The book sold well enough that they did another meeting of Supes and Spidey. Perhaps they will meet again. Now that they are both movie stars perhaps it will be on the big screen.