My Conversation with Archie Andrews 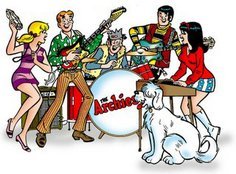 When I got home this afternoon I had a surprise waiting for me on my answering machine. As I listened to the messages I heard the voice of Archie Andrews. He said he had some information for me and left his phone# to call him back. I called him back right away.

On My Mind: Hello Mr. Andrews?

Archie Andrews: Yes is this Rick?

OMM: Yes I was just returning your call.

AA: Thanks for calling back so fast. Please don't call me Mr. Andrews. Call me Archie. After waht Jughead told me about you I feel I already know you. I hope you don't mind Jug giving me your phone number but I have some information for you and all of the Archies fans. I told Jug to call and tell you about it but he thought it would be best if if came from me.

OMM: I guess that means it is ok to put on my website.

AA: Yes of course it is. I know that you are aware that Reggie was trying to get the group back together for a reunion tour and a new CD that he was to produce.

OMM: Yeah but Jug said you all turned him down and he was trying to get Josie and the Pussycats.

AA: Well that didn't turn out as Reg hoped. So we all agreed to help him out.

OMM: You mean there will be a reunion tour?

AA: Whoa! Your jumping ahead of me.

AA: That's ok. Your excitement makes what I have to say even harder. You know that Reg was going to be sued by the people backing the tour if he didn't produce a big band that was reuniting. So we agreed to help him out. We had studio time booked to record a new CD and had our first concert date set up.

OMM: What city was it going to be in?

AA: Well Reggie wanted it in Los Angles near his home. Veronica wanted it New York where she now lives. I said it should be closer to where The Archies started. They all said after our reunion in Riverdale it would be too soon to do another concert there.

OMM: But it was only one song.

AA: That's what I said. Betty was with me but Jug, Reg and Ronnie said no. So we agreed on a netural site. Midvale.

OMM: Great that isn't too far from Riverdale.

AA: Yes but it almost didn't happen. Once the record company and the backers found out that Reg could get the Archies they suddenly changed plans.

AA: Suddenly Reggie was out as the producer of the album. They wanted a bigger name like Ron Dante, Mike Omartian or Mike Nesmith. Once that happened we backed out of the deal. We said it wasn't right that they would sue Reg for backing out but they can without any punisment. But they wouldn't change their mind it was one of those 3 or no one.

OMM: Why would they take such a hard line?

AA: I don't know. Maybe they owed someone a favor. Any way we did the concert in Midvale last night and just in case there was interest we recorded the concert ourselves in case we wanted to release a live album.

OMM: What songs did you play?

AA: We did. Eveything's Archie (Archie's Theme), Get On The Line, Bicycles, Roller Skates And You, Bang-Shang-A-Lang, Feelin' So Good (S.K.O.O.B.Y.-D.O.O.), Truck Driver, Melody Hill, Who's Your Baby?, Sugar, Sugar, Who's Gonna Love Me?, Jingle Jangle, Inside-Out, Upside-Down, Sugar And Spice, Sunshine, This Is Love, Archie's Party, Tracy, and When Julie Comes Around. I know those last two aren't Archies tunes but the gang wanted to do them and Jug wanted to play guitar on the last song.

OMM: Well I am sorry for the break up again but hopefully a live CD will be out soon. Thanks for letting us all know.

AA: My pleasure. Have to go now Rick hope you and all our fans have a good day.

With that my conversation with a living legend was over. If any of the Monkees or the remaining Beatles want to talk feel free to give me a call.