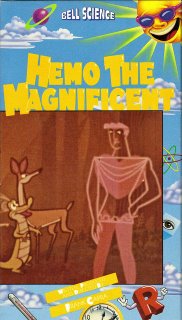 I don’t know if any of these video’s are being used today but Bell Telephone had a science series of films that were use to introduce children to science. They were produced by the Oscar winning director Frank Capra. Not many people may know this but Capra studied to be a scientist. He turned to movie directing when he couldn’t find work in the field of science. I am sure that his love of science and people in general are what led him to create this series. It always starred the same two gentlemen. Dr. Frank Baxter as the scientist of course and Richard Carlson as the television reporter. The cover of the one pictured above, Hemo The Magnificent, even has Capra veteran Sterling Halloway in a small part as Jim a technician. Each film usually had the reporter asking the Dr. questions about the subject. They always used what they called the magic screen. Here is where the animated characters came in. They appeared on screen as interview subjects but the Dr. usually taught them things about themselves that they never knew. Hemo is the one that I remember the best. Hemo is treated as a King as he is the giver of life. The Dr. shows how Hemo is important but it is really a team effort to give life to the body. This series made science fun to learn when I was a kid. I hope it or something like it is still around.