This Day In Music History: Olivia Newton-John and I Honestly Love You 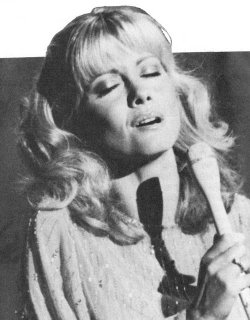 On October 5, 1974 the #1 song was I Honestly Love you by Olivia Newton –John. The song was to be on an album that Peter Allen was about to record. The song was written by Mr. Allen and his producer Jeff Barry. Jeff Barry had written and produced songs for groups like the Dixie Cups, The Monkees, Manfred Mann and the Archies. Mr. Barry said that he thought this tender love song would sound better if recorded by a man. Someone at the publishing office liked it and took it to Olivia. She loved it she said “I was terrified that I would find out had already been done.” Since it hadn’t Barry said they decided to let her record it instead of Peter.
Olivia was born on September 26, 1948 in Cambridge, England. Her father was the Dean of Ormond College in Melbourne Australia. Her grandfather was also an academic and the best friend of Albert Einstein. She had a normal life until she was 11 years old. That was when her parents divorced and she and her Mom moved into an apartment. Her Mother gave Olivia her first guitar when she was 13. She sang in coffeehouses on weekends. Later she joined an all girls jazz group called Sol Four. Later, she won a Haley Mills lookalike contest. The prize was a trip to England. Her Mother said it was ok as it would broaden her horizon. She went with her friend Pat Carroll. When her Pat’s visa was up Pat went home. Olivia decided to stay. She got a part on Cliff Richard’s television series. She recorded the Bob Dylan song “If Not For You” and charted in America at number 25. Don Kirshner met her and got her to join a group called Toomorrow for a film and recording concept that he had in mind. The concept flopped. However, her new song, “Let Me Be There”, was a huge hit at #6 in America. It won her a Grammy as the Best Female Country Vocal. When she received the award she said “It’s probably the first time and English person won an award over Nashville people.”