The Legend The Illustrated Story of The Bee Gees 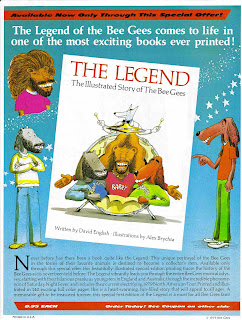 I was looking at some of my old albums this week. In the double album Bee Gees Greatest that came out around 1979 or 1980 I came across this advertisment that I had forgotten about. On the other side is the typical ad for posters, tour books, T-shirts etc. On this side was an ad for the story of the Bee Gees called The Legend. It is written by David English and Illustrated by Alex Brychta in the form of a children's story. This was the first and so far only time I have seen a pop band's story told in this form. I think it is rather inventive of them to tell their story with funny animal characters who look like them. I would imagine the one behind the drums is their Father since he was a big band musician. No I have never read it and I don't have the book. I was a huge Bee Gee fan back then and am surprised that I didn't order it. If any readers to this site would like a copy you can click here to purchase the book.