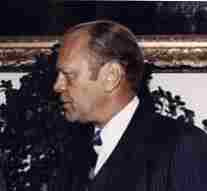 There are times it has been hard for me to keep from giving my political point of view. I have so far been successful. With the death of President Gerald Ford I almost wanted to give it but decided not to. Let’s just say that in hind sight his Presidency was more important then we may ever know. He tried his best to get us past Watergate and WIN the war against inflation. Unfortunately both battles were too big for anyone and in many ways we are still fighting them. Especially, the one on inflation. I doubt any President will ever beat that opponent. Gerald R. Ford passed away today at the age of 93. Our country may be better off then we knew for having him for so long. Rest in peace President Gerald R. Ford.
Posted by Rick L. Phillips at 9:37 AM