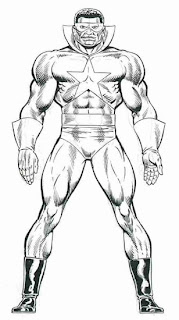 Battlestar was created by Mark Gruenwald and Paul Neary. He first appeared in 1986 in Captain America #323 under his real name of Lemar Hoskins. He met a man called the Power Broker who gave him super strength and enhanced reflexes. It is through the Power Broker that he also met John Walker. John Walker was the Super-Patriot. He was traveling the country and hiring men like Lemar calling themselves the Buckies acting like they were fans of Captain America. They would attack Super-Patriot and he would win. Then he would announce that only the people of America should vote on who deserves the role of Captain America. When the Government stepped in demanding that Steve Rogers do what they wanted, as it was a Federal program that created Captain America, Rogers quit and took over a new identity known as the Captain. The Government hired John “Super-Patriot” Walker to be the new Captain America and Lemar Hoskins was to be the new Bucky.
In a short time Lemar changed to a new identity. He felt being called Bucky was demeaning. In reality it was African-American readers who wrote in to Mark Gruenwald and told him African-Americans find the name Bucky demeaning. Mr. Grunwald didn't know that but took action to fix the situation. In the end this wound up strengthening the character and the storyline. Battlestar took on a new costume and a shield designed to look like the shield that Captain America originally had. He called himself Battlestar. He had many adventures with the new Captain America but eventually they split up. Later Steve Rogers became Captain America and John Walker became the U.S. Agent. Battlestar had adventures on his own and for awhile joined with Silver Sable and the Wild Pack. More recently he has teamed up with Steve “Captain America” Rogers taking a stand against the Superhuman Registration Act in the Civil War mini-series.
Posted by Rick L. Phillips at 3:01 AM