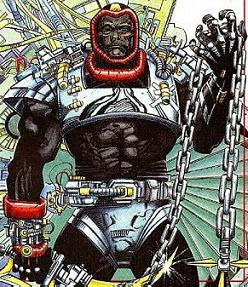 Hardware is really Curt Metcalf. He is a superhero who was created by Dwayne McDuffie and first appeared in Hardware #1 in 1993. It was published by Milestone Comics through DC Comics. It was the first title the company published and was its flagship title.
Curt was a gifted child and when it was discovered he was enrolled in a special prep school. He showed he was much smarter then the other children. Even though he was about 13 when he enrolled he was 14 when he graduated and was 15 when he got his first college degree. His backer Edwin Alva Sr. paid for his education in exchange for employment. Years later after Edwin had made a lot of money from Curt’s inventions he asked for a point or two of the royalties. Edwin refused telling him he never thought of Curtis as family but as just a cog in the machine of his company. Curtis thought of quitting but a clause in his contract prevented him from doing so. Every where he turned to leave the company or try to get money from his inventions was blocked by Edwin Alva Sr. and his connections to organized crime. So Curtis created Hardware to stop Alva’s criminal operations. In a way since Alva funded his education and Curtis uses his equipment to build his crime fighting gear he actually helped Curtis create Hardware. Every night Curtis put on a high tech suit that he uses to help track down Alva’s illegal businesses.
Posted by Rick L. Phillips at 3:01 AM