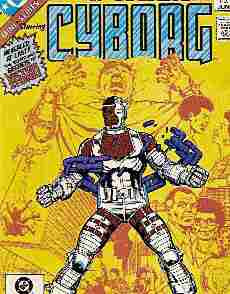 Cyborg is really Victor Stone and a member of the Teen Titans at DC Comics. He was created by Marv Wolfman and George Perez in 1980 and first appeared in DC Comics Presents #26. At this writing he is occasionally played on the TV series Smallville by Lee Thompson Young who also was the star of the TV show The Famous Jett Jackson.
The characters history is that he was the son of two scientists. In the process of one of their experiments they accidentally brought a monster to Earth. The monster maimed Victor. While trying to save their sons life they turned him into Cyborg. He was now half-man and half-machine. It has given him super strength and advanced weapons and sensors. His relationship with his family has been troubled since then but he found a new family in the Titans. Cyborg was badly damaged in a plane crash. While his body was able to be repaired his mind wasn’t. However, a race of aliens was able to help his mind and in return he stayed with them for awhile to teach them about humanity.
When he came back he became the leader of the Titans. He has helped others in the Infinite Crisis adventure and in the mini-series 52. During those adventures he had to leave the leadership of the Titans in the hands of Beast Boy. While he did returned to them he was not their leader. He has since been offered membership in the Justice League.
Posted by Rick L. Phillips at 3:01 AM