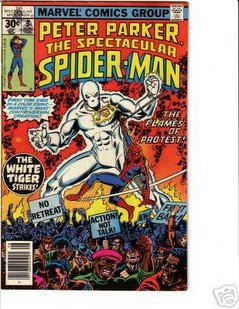 Back in the 70's Marvel ventured in to the relm of magazine sized black and white comic books. Most of them dealt with Dracula, the Punisher, the Hulk or the White Tiger. I remember seeing them at the local drug store and flipping through them but I only bought one of them. The reason was that I didn't care for my comics being in black and white. I have come to appreciate them over time but I still prefer my comic books in color. As my appreciation of those early black and white comic books has grown I wish I had bought them. What little I recall is that the art was pretty good and so were the stories. Perhaps someday some of those will be reprinted. While everyone had heard of Dracula and the Hulk. At that time most people were still being introduced to the Punisher and the White Tiger. Frank "The Punisher" Castle is now fairly well known to the public thanks to a long running series of books and two movies. However, the White Tiger is known only to the comic buying public & so of the kung fu crowd who grew up in the 70's. My first really good reading of a story that involved him was in Spectacular Spider-Man #9 from 1977. His real name was Hector Ayala. He got his power of the White Tiger from the Jade Tiger amulets. (Shouldn't he have been called the Jade Tiger then?) He fougth crime cartels, street crime and from time to time would team up with the likes of Daredevil or Spider-Man. But fighting crime is a dangerous, tiring and thankless job so Hector retired. After a while the call to don the amulets and a good storyline proved too much so Hector was back as the White Tiger. However, this time he was framed for mureder. With Matt Murdock as his lawyer he couldn't loose could he? Wrong this was one of the few cases that Murdock lost and Hector went to jail. He also died in jail. His niece, Angela Del Toro, inherited the amulets but has not put them on yet. According to this article, that may soon change.