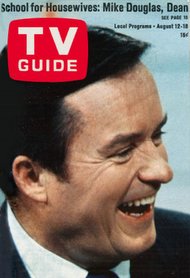 I just found out that longtime talk show host Mike Douglas just passed away. This show was always on in my house. It was one of the few talk shows that I liked to watch. Yes, there was Dinah Shore, Merv Griffin. They were ok and who knew what crazy guest Phil Donahue was going to have on next. Who knew most of the industry would follow Phil's lead? Then there was Mike Douglas. He did the kind of talk show I liked. He kept it fun. I wish I could remember more about the show. He had alot of musical and comedic guest. One tried to tell him how some people naturally say some words funny and get a laugh with them. After saying a series of words Mr. Douglas showed he said the word purple in a funny way. Not the best memory but means something to me. Roger Miller was also on the show and bragged about how he can rhyme anything. Mike put him to the test and he didn't rhyme very much. Having had a few hit songs with big bands he sang with Glenn Campbell, Rita Coolridge and John Lennon. Mr. Lennon and his wife Yoko hosted the show for an entire week. It was an event that is still talked about to this day. In the 70's there was a song to promote his show. It was "Mike makes your day! Happy and goofy and you'll like him that way!" My Mom was a fan of the show and she mentioned how the song was true and she felt better after watching his show. As the article in the issue of TV Guide above says he was the Dean of the school for housewives. Most talk shows today try to educate you or pander to the lowest common denominator in the human condition. Mike Douglas's show made everyone who watched his show feel happy. Not a bad legecy to leave behind.
The above cover is from TV Guide.com.