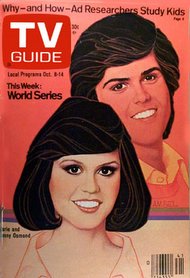 ABC’s search for a hit variety series came to an end in 1976 with the Donny and Marie Show. Like some of the other shows we have discussed the host were related to each other. However, this time they were brother and sister not husband and wife. This way the network didn’t have to worry if they would get divorced and the show would be canceled as a result of marital problems. Rumor has it that Fred Silverman saw Donny and Marie Osmond co-host the Mike Douglas show and thought they could host their own show. He was right and signed them up. Sid and Marty Krofft were asked to produce the show. The first episode aired January 16, 1976. Donny was 18 and Marie was 16 when the series started but both were show biz veterans. Donny was four when he and his brothers were regulars on the Andy Williams show. Marie was also introduced to audiences on Andy Williams show and a few years later started a solo country singing career. Her big hit was Paper Roses. So as you can see these were not two rookies who were going to be taken advantage of. Paul Lynde, Johnny Dark and almost every member of the Osmond family were frequent guest on the series.
The show was designed to appeal to all family members. However, with the two stars being teenagers they became instant teen idols. My cousins and our friends in my area jokingly referred to the show as the Who? And Marie show. With a girl as pretty as Marie Osmond there were a lot of red blooded American boys that tuned in but might not have admitted it to their friends. Most girls I knew had no problem admitting they watched it because of Donny Osmond.
The music was pretty good. No matter what your taste is in music you have to admit they can sing. The comedy, while it was funny it was usually pretty corny. But that is what you usually can expect from most family comedies. The kids laugh at the old jokes since it is the first time they have heard it. The adults laugh because the delivery was very funny even though they already knew the punchline. As an example one time Donny’s brothers ganged up on him and dumped him into a giant whipped cream pie. Donny just looked up and said “I think I finally made a big splash on television.”
By 1977 the Osmond family decided they wanted to go home to Utah. They had a studio built in which to produce the show. The first episode they produced was the 1977 Christmas episode. The shows guests were the entire Osmond family, the Mormon Tabernacle Choir and Paul Lynde.
By this time Donny and Marie wanted to appeal more to adults. Marie hired Bob Mackie to design her gowns and had her 18th birthday on the show. In the final season Donny turned 21 and had his wife on the show. In the last few months the name changed to the Osmond Family Show. It ended its run on May 6, 1979.
Marie resumed her country singing career and sells dolls that she made on the QVC cable network. Donny has appeared on Broadway and was the host of the game show $20,000 Pyramid. Later Donny and Marie hosted a talk show together called…the Donny and Marie Show. It lasted one season.
The above cover is from TV Guide.com