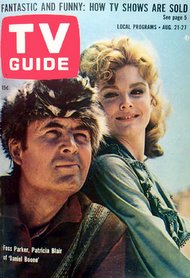 ***I had originally posted this thinking that Aaron Spelling was the executive producer of the show. I have since found out that I was wrong. I have taken out all references to Mr. Spelling but left my memories of the show. If this as caused others to report that Mr. Spelling was the executive producer as I did when I saw this on other sites that I thought was reliable then I am sorry.***
This show was a big hit for NBC. It ran from Sept. 24, 1964 to August 27, 1970. Mr. Parker had many co-stars on the show who were either already famous or soon to become famous. They included Albert Salmi, Ed Ames, Veronica Cartwright, Rosie Grier and Jimmy Dean. Yes the Jimmy Dean who now sells sausage. Daniel Boone and many of the characters on the show were based on real life characters from the history books. The stories took place in the North Carolina-Tennessee-Kentucky area before and during the Revolutionary War. Mr. Boone was one of the founding fathers of my home state of Kentucky. Daniel lived in Boonesborough the town that was named after him. It really does exist as I have been there before. The show was part entertainment and part history lesson. At the time the show was airing in reruns I was in elementary school learning about those explorers who started Kentucky. The ones talked about the most were Daniel Boone and Simon Kenton. I kept watching the show to see if they would ever meet but they never had Simon Kenton on the show. As you can see the show helped me with my history lessons. I could now put a face on Daniel and some of the others that we talked about in class. Sometimes the show took place entirely in Boonesborough. Other times it took place while Daniel and his friends were out hunting or exploring the area. Most of the Indians there were like Mingo, played by Ed Ames, friendly to the settlers. Some were not. When the Revolutionary War came Daniel defended Boonesborough against the red coats. The early episodes were filmed in black and white. Most TV shows were filmed in black and white in 1964. With color TV getting more popular the next season they started filming the show in color. In 1970 the show was canceled. Fess Parker had a hit career in movies and television and decided to retire from show business. He went home and opened up a winery.
You can click here or on the title above to go to a fan site for the show. There you can read an announcment for an upcoming DVD release date on the show.