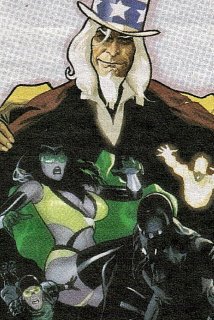 I gave a brief overview of the Freedom Fighters from the 1970's in this earlier posting. Now DC Comics has announced that on July 19th the new Freedom Fighters series will be released. These are not the ones from the 70's they are no more. Yes it will have Uncle Sam, The Ray, Phantom Lady, Firebrand and my favorite, at least from the 70's team, the Human Bomb. Haven't heard about Black Condor but there is a new one called Big Foot. Somewhere along the way is Father Time. This new team operates as secret government agents. At one point they become wanted by the law just as in the 70's series. As you can tell they aren't wanting to release too much. This is not an exclusive as what I have told you is gotten from the comic shop news. Will fans of the 70's series like the new series? Time will tell. You will have to judge this as a new team not the reunion of the old team if you want to enjoy it.