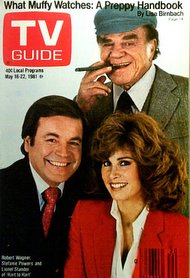 In 1979 Aaron Spelling teamed up again with Robert Wagner. This time it was for Mr. Wagner to star in a new TV show. It was called Hart to Hart. It was created by best selling novelist Sidney Sheldon. Mr. Wagner played Jonathan Hart. Stefanie Powers was his wife Jennifer Hart and Lionel Stander was their chauffer/man Friday Max. They also had a dog named Freeway. This all star cast show premiered in August 1979 on ABC. It started on Saturday nights at 10pm but was quickly moved to Tuesday at 10pm where it was a huge hit and stayed there its entire run. The show really seemed like a television version of the Thin Man movie series. You remember William Powell played a police detective who married a rich woman. They had a dog named Asta and they solved crimes in their high society circles. William Powell may have married into wealth but we were reminded each week in the opening sequence that Jonathan Hart was a self-made millionaire. I wonder how the company that Mr. Hart started did without him guiding the company day after day. He and his wife were always flying to beautiful locations to visit friends. At some point one of their friends were either murdered or suspected of murder. Of course they felt obligated to solve the crime. Forget the police. They don’t know what they are doing in fighting crime. Only wealthy industrialist knows how to solve crimes. Why is it always murder? Why aren’t they ever suspected of robbery or some other crime that isn’t so fatal? Another thing is why on shows where ordinary people solve crimes, if you can call the Harts ordinary, is it always people with well paying jobs who solve crimes? I guess no one would tune in to watch the Hobo Detective every week. This may sound like I didn’t like the show. I did like it and watched it almost every week. It was a lighthearted murder mystery at its best. The show had good writing, acting and directing. None of that guarantees that a show will be a hit but thankfully this one was. I remember reading that Lionel Stander came out of retirement to play the part of Max. I guess he knew a good script when he read it.