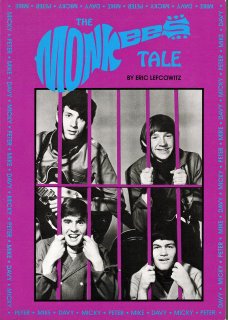 Well I must really start looking at the publishing dates of the books in my collection. This book, “The Monkees Tale”, was first published in 1985. So last year was its 20th anniversary. That means that I am on time for the 21st anniversary of the book. Now why is this anniversary important, at least to me, in the Monkees history? Sure there were other books put out by the Monkees but most of them were from the teen magazines in the 60’s and 70’s. To the best of my memory this was the first time a fan wrote a book that was published about them. I only heard about it through word of mouth by a friend who worked in the local music industry. At the time copies of the book were hard to come by as it was not published by a large publishing company. The company that published it was Last Gasp of San Francisco. The book had to be researched and written before being published in 1985. With it coming out in 1985 and the Monkees reunion tour starting then the timing was perfect. Maybe it was on purpose or maybe it wasn’t. But request for the book grew and its publishing was probably a shot in the arm for Last Gasp. It was a well written account of the group up to that time. From that point on it was profitable for awhile to publish books about the Monkees. Some were pretty good but, as I stated in an earlier posting, some were done just to make a quick buck. Not this one. The reader can tell this one was done out of love and admiration.
How did the publisher want it marketed in book stores? Was it about music or television? If you said television then you are wrong. If you said it was about music then you would be only half right. They marketed it as music/sociology. Music is one of the main factors, especially in the earlier decades, that defines our society. What type of music you listen to cane tell a lot about the person. Most people who listen to Opera don’t listen to country music. If you listen to Rock you may not listen to Rap. In church some prefer contemporary Christian music over traditional Hymns. Of course the more well rounded listener likes all of them. We call most of them music teachers. The creation of the Monkees was an extension of the times. Mr. Rafelson had the idea when he was on the road with a folk group. The British invasion and the hippie movement changed things and when he had the chance he made the show about a four man rock band. So from the very beginning the Monkees were a reflection of the society during the 60’s. I could go further into this but I don’t have the time right now. For the rest you should really read the book. Perhaps at another date I will dig deeper into the subject. But Happy belated 25th Anniversary to Eric Lefcowitz and his book The Monkees Tale. Which reminds me that next week is my wedding anniversary and I am planning a special story for this site. It is a fun fiction story/interview to me and I hope to you too.