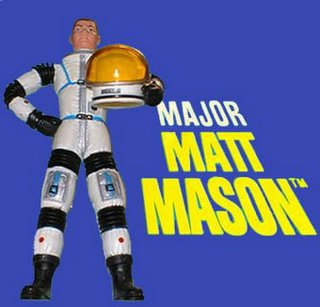 When I was growing up most boys wanted to be grow up to be President, a Cowboy, a Solider or an Astronaut. Well this also helped the action figure business boom. Like all boys I had a G.I. Joe, Johnny West and at the time the newest figure on the market was Major Matt Mason. With the 60's some of these occupations started to leave a young boys thinking. With Kennedy we saw that a President was human and could be killed. Of course this had been done before but none of them were broadcast on live TV like his was. The urban life was invading the countryside so the Cowboy was becoming a thing of the past and with Vietnam no one wanted to be a solider. That left, as Star Trek said, the final frontier...Outer Space! Thanks to the space race Major Matt Mason was a huge hit in the late 60's. I had most of the toys. Of course I had the Major himself. Sgt. Storm, the space station, the space crawler and a martian with a big green head whose name I forget right now. Actually I still have the Major. I don't know what ever happened to the others but I can't bear to part with him. I have tried sometimes but have you ever tried to get rid of something that you have had that long that looks back at you? It can't be done. I never seriously wanted to be an astronaut. I leaned more toward the law, writing and broadcasting. So of course you know where I am now working...finance. I guess the real reason I keep the Major is because it reminds me of my childhood. I remember the day I got him. Like most of my books and toys it was Christmas day. When I woke up he was under our tree. As I started to play with him my Dad was dressed and had on his winter jacket. He sat down on the floor next to me and Mom took our picture. Why? I wondered I am going to see Dad all day today aren't I? Wrong. The photo preserved a nice memory and was the only time my Dad would see me that day. My Dad had to work on Christmas Day. Thankfully he didn't have to work every Christmas but I missed him that day. I am glad that Mom took that picture.
I tried to put on a scan of the Major Matt Mason that I still have but it didn't scan well. So I got the above photo from this site called of course Major Matt Mason: Mattel's Man In Space I even saw an ad about a comic book for the Major but I never saw the book actually come out for sale. I remember reading that you had to mail in to get the first issue. I guess not enough interest was there with the mailings to publish a second issue and put it in stores.