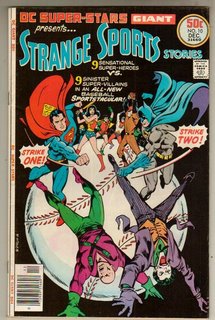 I came across this issue and it reminded me of a favorite past time that my cousin Randy and I would play on rainy days. We would draw up a baseball diamond. Then designate certain areas where if you hit the ball it would be a single, double, home run, out etc. We would then fold the back part of the paper up to act as the stadium wall and put a hole in the wall. If you hit the ball through the hole it was an out of the park home run. Next we would write up a batting order and give them player positions. For example Plastic-Man at 1st base Spider-Man as catcher and Superman as pitcher. We could put anyone in the order but they usually were names of superheroes. The next thing we did we took more bits of paper and waded it up into a little ball. We used our pencils for the bat. We would play one game after the other and this passed the time till either the rain stopped or one of us had to go home. We both admitted to each other that there were days when we were home alone and bored that we played it by ourselves to pass the time. We must have been on to something. Not long after that I noticed that DC would run stories about the heroes playing baseball. It wasn’t Marvel against DC it was always the DC heroes against the DC villains and the fate of the world rested on who won the game. Isn’t it strange how you can think of an idea that never was done before. Then a few months later someone in a position to get it published or produced does just that.
Anyway that was what we did when we were about 13. A few years ago I remembered this on a certain rainy day. So I decided to play a game by myself. I must admit that it was fun. For all of 2 minutes. What you enjoyed at 13 you may not enjoy at 38.
The above picture of DC Super Stars #10 Strange Sports Stories I got from this auction site.

Posted by Rick L. Phillips at 9:00 PM No comments:

I just saw this cd Not The Freeze by a group called Penny Arkade
at amazon.com. What drew my attention is that it is an album that was produced by Michael Nesmith. It was done in the mid 60's but I don't know if it was done right before the Monkees or during the Monkees. It was shelved and not released. However, Sundazed has now released it. Check it out at amazon to see what it looks like.
Posted by Rick L. Phillips at 6:08 AM No comments:

I think the problem I am having with the pictures is not with my server but with Picassa. I thought I was going to have a picture with this post but no. It let me sign in, which it hasn't been letting me do, but then the screen went blank. So no picture of the Archiw with this post. I have included another video above. It was titled the Archie Live. I thought it would be Ron Dante and his band but it is just him alone from around 1969. Hope you like it.
Posted by Rick L. Phillips at 5:29 AM No comments:

Well I seem to be having problems with my server or is it picassa again. Can't post a photo with this posting. I hope this works as I have not done this before. Thanks to booksteve I have been pointed out to a site that has videos. There was one to A Dolenz, Jones, Boyce and Hart video but I decided to show this one of Mike, Micky and Davy in a commercial for Nerf balls. I had never seen it before so I thought I would share it with you. Hopefully you can see it by clicking on the screen above. I know I have it in my profile section but I have tried in vain to put it else where on the blog with no luck. So look at it now as it may not be here in a few days. If I keep hving trouble with my server and/of picassa they might be gone too. The server problem has been going on for a month now. As Sam on Quantum Leap might say..."Oh Boy!"
Posted by Rick L. Phillips at 9:10 PM No comments:

A belated Happy St. Patrick's Day to Shamrock and Banshee 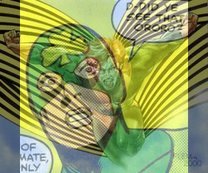 Here is that double exposure of the Irish superheros from Marvel Shamrock and Banshe. It happened by accident but I kind of liked it so I wanted to share it. I thought that in the midst of everyone on March 17th talking about all the Green Arrow or Green Lantern and Green Hornet someone should have been talking about the real Irish superheros. Marvel started doing heros from other countries when comic book sales in America dipped but sales in other countries were fairly strong. Mostly it involved changing the X-Men into what we know today. While the hero from Canada, Wolverine, is their most famous. It did manage to create Banshee. He has the ability to flie and a very powerful scream. Sort of like Black Canery if she could fly. Other times the Marvel heros would team-up even more from other countries. Such as in Contest of Champions where I got this photo of Shamrock from. I know that this is not her only apperance but I have not seen her anywhere else so I don't have much info on her. Just that in her last battle she broke her leg and seems to have retired from crime fighting.

Posted by Rick L. Phillips at 6:13 AM No comments:

Haven't posted any this weekend as I have been having trouble with my server and Picasa. Picasa are the kind people who host my photos that I post on this site. It seems that my server is now running but I am still having trouble with the photos. So I am not able to show the cool double exposure that I got of a photo showing the two Marvel Irish heros that should have been showcased this St. Patrick's Day weekend but I didn't see them anywhere. They are Shamrock and Banshe. I will show that once the photo trouble is taken care of. I hope that all is well with you and yours.
Posted by Rick L. Phillips at 10:02 PM No comments: