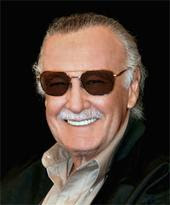 Wow! First He conquered the world of comics. Then he conquered the movies. Now it seems he is trying for the world of politics. Here is what has happened when Stan Lee tried for the office of Kentucky Attorney General.
Today, the Herald-Leader endorsed Tim Coleman (R) over State Rep. Stan Lee (R) (and two other candidates) to be the Republican Party's nominee for attorney general.
Ok it's not the same Stan Lee but it did catch my attention.
Posted by Rick L. Phillips at 6:20 AM No comments:

A Note From the God of Thunder 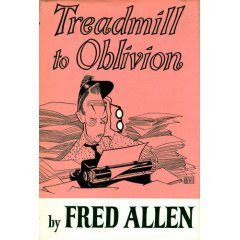 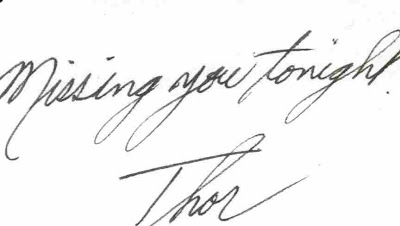 This past weekend my wife and I held a Yard sale. For those of you who have ever had a yard/garage sale you know that most of the work is really done the day before getting ready for any of the hopeful customers. The sale did well but not as well as I had hoped but every little bit helps. One of the items I was selling was a book by Fred Allen called Treadmill to Oblivion. I originally bought the book at a library sale as I am an OTR fan and had planed to read it. I never got around to it and so I decided to sell it instead of it sitting around gathering dust. Better that it had a chance to be read by an old time radio fan bigger then I am then to just be sitting around. While getting the book ready for its next lucky owner I found a note. As you can see from the photo above the note said "Missing you tonight." The surprise to me was who signed the note. The God of Thunder himself Thor. Ok I know it wasn't from Donald Blake or whatever Thors alter-ego goes by this week. I just thought it was funny. Then I wondered if the person this was intended for ever saw the note. It was possible that two people who were in the library at the same time had a date for that night. Something came up so that Thor or the other couldn't be there. So Thor wrote this heartfelt note and sliped it into the book the other had and was going to check out. Unknown to him they changed their mind and put the book back without ever seeing the note. Maybe their friendship broke up because of this missunderstanding when Thor didn't show up. Who knows? I have a big imagination but this all could be true. So if the person the note was intended for is reading this Thor really did miss you that night.
For those of you who would like to have been at my yard sale but weren't then you can contribute to my financial health by giving to and clicking on the paypal button below.

Posted by Rick L. Phillips at 7:28 AM No comments:

History of the DC Universe

I came across this History of the DC Universe poster that and the newer cover by Alex Ross. I thought that Black Lightning would be on at least one of them. If you look closer you will see that BL is not anywhere to be seen on either of them. How can you have a History of the DC Universe poster and not have BL on either of them. He was the first African-American in DC history to have his own self titled book. He is a big part of their history. However the Ray is in the poster on the back row. Since BL made his first apperance around the same time as the Ray did with the Freedom Fighters, perhaps I should say the Ray reappeared with the FF as they were the Quality Comics characters who appeared seperately until DC joined them as the Freedom Fighters, and both books are closely related to the DC Implosion they may have used the Ray to represent all those from that period. Still I thought Mr. Ross might have included BL in his updated version. Once I looked closer I didn't see BL there either. I would have thought he would have been in at least one of them. Yet Judo Master is in both. He is in the lower right hand corner of the poster next to Mister Miracle and Jay Garrick. What are those three looking at that has them so amused? You have to look even closer in the Ross cover. He is in the lower left hand corner as a silhouette.
Posted by Rick L. Phillips at 12:28 PM No comments: