I can't believe I almost forgot this. It may not be morning now but here is today's Saturday Morning Cartoon Starring Wally Gator.
Posted by Rick L. Phillips at 5:44 PM No comments:

Here is a link to some remixes of Monkees songs that a fan has done. They are pretty good so you may want to subscribe them.
Posted by Rick L. Phillips at 4:37 AM No comments: 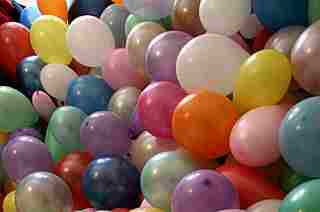 We are having a double celebration today as it is my birthday and the first anniversary of my site Mail It To Team Up. Come on in and have a good time. Luke of El Jacone's Comic Book Bunker and Being Carter Hall is taking the coats and hats. Passing out the soft drinks is Brian of Comics in Crisis. Taking care of the tunes is Kent of Forgotten Hits. Talking to Kent is Sleepy Jean of Love Is Only Sleeping. "Hey Jean! Make sure Kent plays some Monkees songs." Taking care of the grill is Robby Reed of Dial B For Blog and right now he is talking to Adama of Dispatches From The Arrowcave and Paul of Comicbook World. Rob is making like Aquaman out back in the pool. (When did I get a pool?) In the theater room Marty of the Ephemera site is watching some old movies. (I didn't know I had a theater room!) Out by the barn John of Pop Culture Safari is riding horses with David of Superman Fan.Net, Protos of Superhero CD and Jon of Random Acts of Geekery. "Wait a minute now! I know I don't have a barn or horses! Whose house is this anyway and how for the love of AOL did we all get here?" Well here comes my wife with the cake. I suggest we all eat it quickly and get out of here before the owners show up. Please don't break anything before we leave.
Posted by Rick L. Phillips at 12:01 AM No comments: 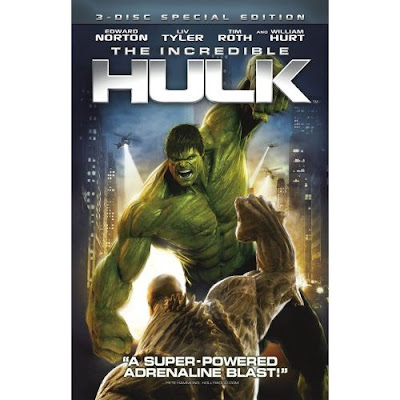 Well it is finally here. I didn't get to see this at the movies and now I see that it is ready for pre-order at Amazon.com. I am going to order it and you can too if you click on the link below.

Posted by Rick L. Phillips at 9:50 AM No comments:

Due to some unexpected circumstances I must change the date that the Millie the Model blog head contest will end. I must conclude it on Sept. 9th. Everything else is the same. I am sorry for the change but this means you must get your entries in sooner then I am sure that you intended. Please accept my apologies for this sudden change.
Posted by Rick L. Phillips at 12:15 AM No comments:

Here is a fun free on line game to play. 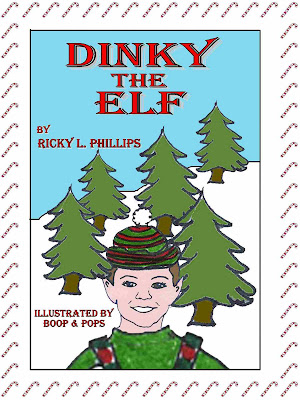 So far everything looks like it is a go for my book Dinky the Elf. Above is the cover art that some friends at my church did for the book. Hopefully it will be coming out soon and in your local bookstores. I hope to continue writing children's books and maybe more adult ones like political thrillers, mystery, suspense, science fiction. For now I have to make sure that Dinky the Elf is a success. I will let you know more as my publisher tells me. Also I may be in the market for a new publisher as the one I am with is a small one person operation and this looks like it will be their last book due to health reasons. So if you are a publisher looking for a new writer then look no further then me.
Posted by Rick L. Phillips at 9:51 PM No comments: 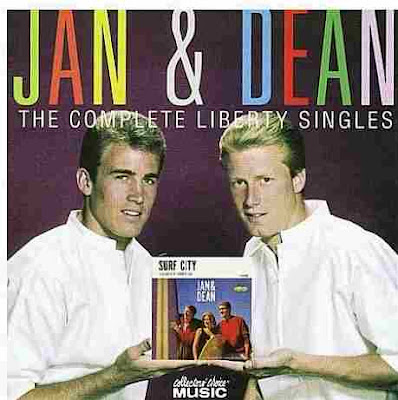 When surf songs promoting life on the beach became big hits on the charts it spawned many new groups. Groups like the Atlantics, the Surfaris, the Beach Boys, the Tornadoes, Jan and Dean, the Ventures, etc. While the Beach Boys were the ones to shoot to super stardom, a close second in the surf music category goes to Jan and Dean. Many say that their fame was only because of their friendship with the Beach Boys. However, the two of them together make up one Brian Wilson. I am glad that the Beach Boys were a family band but I think Brian could have been a hit as a solo artist. Jan Berry was musical genisus and the high falsettos of Brian's could only be equaled by Dean Torrance. Here is what the makers of this CD have to say about their new Jan and Dean CD.
A big part of our job here at Collectors' Choice Music is to survey the pop music landscape (or in this case, seascape) for artists whose collections don't really do them justice, and we think there's a strong case to be made that Jan & Dean are at the head of the line. Sure, their classic Liberty recordings have been anthologized, but never comprehensively, and almost always in re-mixed stereo, NOT in their original mono. Well, not this time. We've gone back to the original mono single tapes of EVERY one of Jan & Dean's Liberty singles, both their A and B-sides, then checked and checked again to make sure they were the RIGHT tapes, to bring you the ORIGINAL MONO SINGLE VERSIONS of these songs, exactly as they were released and exactly as they sounded when they climbed the charts and blared out of your Woody's car radio. The package includes extensive liner notes by Ed Osborne and David Beard featuring interviews with those close to the action, like engineer/producer Bones Howe, Jan Berry friend/co-writer Don Altfeld and Dean Torrence himself, plus photos of Jan and Dean and shots of some of the single's label and jacket art.
Below is a listing of the songs on the CD
You can order it by clicking on the Amazon link below. All sales go to the upkeep of this site.

Posted by Rick L. Phillips at 9:13 AM No comments: 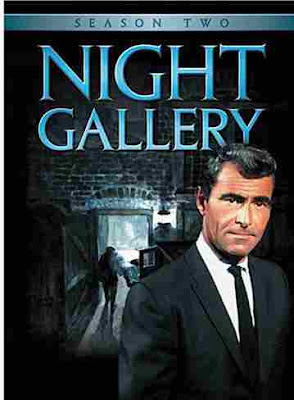 Prepare for the unexpected as Season Two of Night Gallery comes to DVD! This 5-disc DVD set contains 61 stories, created and hosted by the master of mystery: The Twilight Zone’s Rod Serling. With guest performances by Hollywood legends that reads like a roster of Who’s Who in Hollywood, you’ll be sure to see sights to amaze. Featuring audio commentaries, behind-the-scenes featurettes, and a gallery presentation of the paintings from the series, this collector’s set is the classic anthology of timeless, spine-tingling entertainment you don’t dare to miss!

Posted by Rick L. Phillips at 3:43 AM No comments:

A few weeks ago Marty of Ephemera asked me to do a guest post. For those of you who didn't get to read it here is what I wrote. 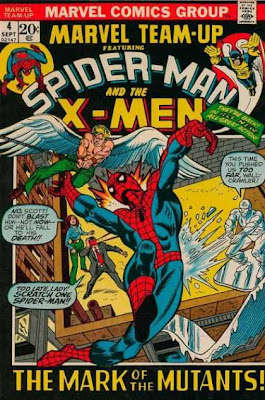 Recently, I was honored when Marty asked me to write this guest post for his site. I asked him when he would need it, and what he wanted me to write about. He gave me the deadline and said the subject was up to me. I love the freedom of choosing what I want but freedom at times is a double-edged sword. There was so much to write about that I didn't know where to start. I mean, I have so many things that I have collected over the years. I have Baseball cards, books, music (mostly about the Monkees), comic books, photographs, etc.

Finally, I decided on comic books.

One reason I decided on them is that I have four, yes, I said four, sites dedicated to comic books. Marty and some readers here are more familiar with my pop culture site called On My Mind. However, I also have Comic Book Letterheads Museum, Mail It To Team Up, Millie the Model and Plastic Man Platitudes. So, as you can see, I am deeply in to comic books.

Now, what should I write about them?

I had recently purchased and was reading an old copy of Marvel Team-up. It was issue #4, and normally, I would see it going for $10 to $20, but I was able to get it for $1. Sure, the cover was torn but even in this condition I thought it would be worth a little more the $1. Since it was bagged when I bought it, and I didn't notice something when I bought it that soon came to my attention when I opened it at home. The cover was no longer attached to the book. Not only was the book not worth $10 it probably wasn't even worth the $1 I paid for it. Yet, I was still happy to have it, not as much as I was before but still happy, and I enjoyed reading it. This got me to thinking. Why do we still happily collect anything even if we know it is worthless? I am applying my thinking to comic books but it can apply to anything you collect. 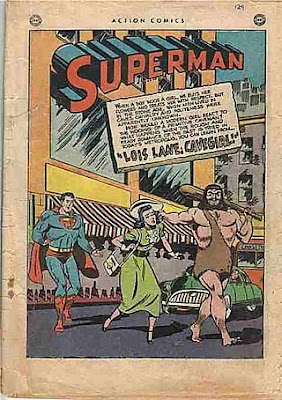 I started collecting comic books before I could even read them. My Dad sold comic books in the local Mom and Pop shops in my area. He and my Mom would let me look at the pictures and hoped that it would spark me to want to learn what the characters in the books were saying. It worked too well, I fear, as it sparked a life long hobby.

To say that I have kept collecting by purchasing back issues for nostalgia is keeping it simple. That is only part of it. The other part is for history. To buy a book means that I have a part of history. If I could afford to buy a copy of Action Comics from the 1940's that was coverless and read to death but in still readable condition that someone was selling for an affordable price, I would feel lucky as I had a part of publishing history from the 1940's. Sure, it may never be worth a lot, but I have something that has been part of something larger then I am. Who knows where this book has been? It could have been book that a GI read during the war. It could have been a book that a family member once owned.

My Dad thought he had saved Superman #1 to give to me, till he found out his Mom threw out his collection when he left home. Remember comic books were just ephemera that could be thrown away without a second thought. There was even a back issue that I bought that had a mark on the bottom of the front page. I recognized it as one that my cousin would put to brand his books. It turns out he gave it away when he was younger, and it made it back full circle into the family. Actually, it made it full circle. I gave it back to him when I was done with it.

Another thing I find interesting about buying cheap back issues is when I find the name of person written in them. Unlike what happened with my cousin, they are usually names of people I have never met. Some times if they have filled out a coupon in the book but never used it then I will have their old address. It lets you know how far this book has traveled just to be in my hands so I can read it, too.

So, yes, I do collect comics of fun, nostalgia, and possible profits in the future, if I may need the money. But that is just a small part of the picture. It is also a way to see how this art form has touched the lives of so many people over the decades.
Posted by Rick L. Phillips at 6:07 AM No comments: