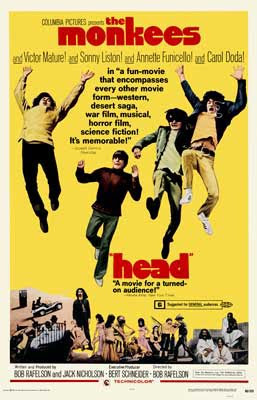 On this date November 6, 1968 The Monkees movie Head premiered at a private showing to family, friends and industry insider at a Columbia Pictures studio. You can say many things about the picture. Most people that I know don't like the movie. Mainly because the movie lived up to it's claim that if thought you found the meaning to the movie they would just take it back again. If you ever want to know what the young filmakers were producing in the 60's Head is a perfect example.
I recently read a funny story about what happened on the night of the premiere to the film's producer and director, Bob Rafelson and Jack Nicholson. They were putting stickers all over New York to promote the movie. Then Rafelson saw a cop about to arrest a man for selling chestnuts without a license. Rafelson tried to come to the mans rescue. While he was talking to the policeman, who was wearing a white helmet, Nicholson was behind him trying to put a sticker on the helmet. Just as he was about to put it him the policeman turned around and got the sticker on the side of his face. With that the producer and director, of a movie that was to premiere in an hour, were arrested and taken away in squad cars. Rafelson was tempted to call a radio station to let the word out to help promote the film.
Below is the trailer for the movie.