The Umpire Strikes Back 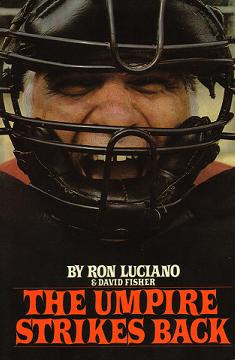 With everyone celebrating the 30th anniversary of the release of the Empire Strikes Back this week I was reminded of this book. It came out not long after the release of the hit film. It was co-autohred by flamboyant baseball Umpire Ron Luciando. This and other books he wrote were about his days as an Umpire from 1969 to 1979. He had many bouts with managers at the plate. His biggest advasary was Baltimore Orioles Manager Earl Weaver. He threw Weaver out of so many games that they finally kept him from being an Umpire when the Orioles played. When he named his top 5 toughest managers to deal with Weaver was the first 4. Frank Robinson was #5 and he called him Weaver's protege. In the eighties for a brief time he was a sports commentator with NBC. Saddly in 1995 he committed suicide. He is best remembered for his humorus books about baseball. Along with the Umpire Stikes Back they are Strike Two, The Fall of the Roman Umpire, Remembrance of Swings Past and Baseball Lite.
Posted by Rick L. Phillips at 1:35 PM No comments: