This Day in Music History: Zager and Evans In the Year 2525 (Exordium and Terminus) 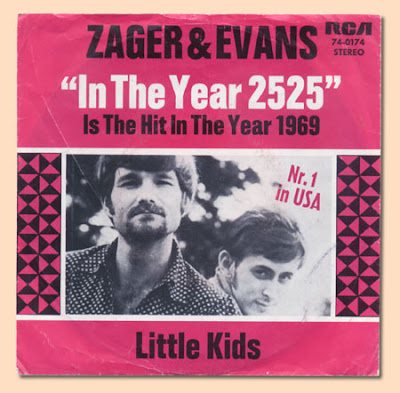 In 1961 Denny Zager was looking for a guitarist for his group the Eccentrics. He spotted Rick Evans playing at a talent show at Wesleyan University and asked him to join. By 1964 Zager quit the group and formed the Devilles. Meanwhile, Evans wrote the song “In the Year 2525(Exordium and Terminus).” He tried to convince the Eccentrics to record it but had no luck.
By 1968 Zager and Evans both left their groups and formed a duo. They were looking for songs to record when they pulled out the 4 year old song. Zager wasn’t sure of the songs potential. In an interview he said “I didn’t go nutty over the song, because it really wasn’t the style I wanted to do.” They decided to put it in their live show to see what the response would be.
Zager wrote a new arrangement for the song so it would more fit a duo then a group to sing. Eventually they decided to record it because they were getting so many requests for it. They invested $500 in studio time and pressed it on their own label called Truth Records and distributed it to local radio stations and record stores.
Talent agent Jerry Weintraub heard the song and flew to Lincoln, Nebraska to meet with them. He signed on as their manager and got them a contract with RCA. It entered the Billboard charts at #72 on June 21, 1969. The prophetic song quickly went up the charts to reach the #1 spot on this day in music history July 12, 1969 and held the position for 6 weeks. If you listen to the lyrics you can hear them hint to how you can get a baby at the end of a long glass tube. So a song written in 1964 foretold of test tube babies even though the first one didn’t happen till 14 years later in 1978. He got the year wrong but in 1964 Rick Evans saw it coming down the Pike.
Not long after the record hit the charts Danny Zager left the group. He said it wasn’t the type of song he wanted to be known for. Sadly since it was his only hit it now is the type of music he is known for. Postings like this and in other areas of pop culture where it is mentioned, like being the subject of a question in the game Trivial Pursuit, will keep the song alive. Also, the closer we get to that year the more you will hear of it.
Zager and Evans remained friends and talk on the phone from time to time. Evans stayed active in the local music community in Lake Tahoe, California. There he wrote songs and preformed in local clubs. Zager returned to private life and now makes guitars for a living. You can buy one if you go to Zagerguitar.com..
Below is youtube.com video of the duo preforming the song on a television show.

Posted by Rick L. Phillips at 9:47 AM No comments: 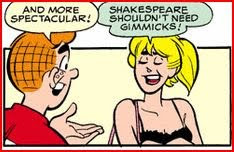 Every now and again a trend comes back. These days in movies it is the 3-D fad that this time seems to be staying. I am too young to remember the era it started in in the 50's but they tried it again when I was in college. Mostly it was recycled horror movies of the 50's but I loved it then. The only problem I had was that since I wear glasses I didn't know where to put those special glasses on that you needed to see it. Once past that I really enjoyed it. When someone handed another actor something I felt like I could reach out and take it. Eventually the fad faded again. Now it is back. I thought I would enjoy it but so far I have not. The reasons are that now it cost more to see them instead of the regular ones. One person told me it was becuase they had to put in sepcial cameras to show them. I don't believe that as they didn't need it before on the earlier films. Second is that for some reason when I put the glasses on I don't see the 3-D effects now. It still looks like a regular movie and I don't want to pay the special price but still see the regular effects. So if the trend contines and they only start showing 3-D, raise the prices and get rid of all the non 3-D movies they will loose me as an audience member. I only thought of this as I saw the above portion of an Archie strip in the papers today and it was on my mind.
Posted by Rick L. Phillips at 3:55 PM No comments: