Here is another favorite video of mine. Uptown Girl by Billy Joel. Of course the woman playing the uptown girl is his then wife Christie Brinkly. The director of this was very good. Perhaps better then the ones I have put up here before. While some of them took up to a half hour to tell the story and play the music, this video seems to tell all of that in less then 4 minutes. The director had previously directed commercials and knew that with a music video sometimes the lyrics of the song can carry the story.

Posted by Rick L. Phillips at 3:10 PM No comments:

Hulk and Hostess Up A Tree 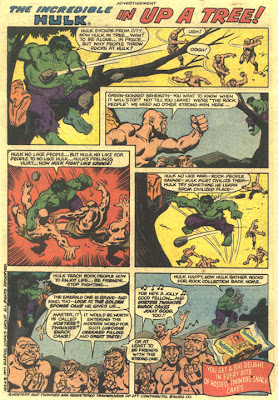 Well this is a switch. Hulk really did learn something from his hero friends and taught it to the rock people. A kinder and gentler Hulk. Who knew Hulk had a rock collection?
Posted by Rick L. Phillips at 3:05 AM 2 comments:

When Will The Six Million Dollar Man Be On DVD?


With a new version of the Bionic Woman on TV you may have wondered when the older version and the Six Million Dollar Man will be released on DVD. Well we may have a long wait for Col. Steve Austin to show up. Over at DVD Guy Dave tells us that Universal, who had the rights to produc the show in the 1970's, failed to renew the rights when they came up for renewal. Dimension Films bought the rights and now the two companies will have to come to an agreement to release the show on DVD. It is a bit more complicated then that so go to DVD Guy where Dave does a great job of explaining it.
Posted by Rick L. Phillips at 6:19 AM No comments:


All of those video hits from the 80's seem to have wound up on youtube.com. This is Sheena Easton singing Morning Train. The song was really going to be called 9 to 5 but Dolly Parton had a recent hit with that title so it was changed to Morning Train. On this video she hadn't learned to lipsync yet but they all became pretty good it once MTV became big. I saw the single as a picture sleeve before I heard it on the radio. Seeing pretty Sheena on that picture sleeve I had to buy it. I am glad it was a hit but none of my friends would have blamed me for buying it if it had been a flop.
Posted by Rick L. Phillips at 10:05 PM 2 comments:

I just saw Cavemen. To be honest neither one of these shows started off with a bang for me. The one I was really looking forward to was Cavemen. I grew up when fantasy was big on TV. Shows like Mr. Ed, Bewitched and My Favorite Martian. So I had high hopes for Cavemen. The first half of Cavemen was boring. Not much to laugh at. Towards the end the show got funnier but not much. To my surprise Cavemen is a realtionship comedy. The basis of the show revolved around the 4 friends who are of course cavemen. One is a ladies man, another heartbroken over an ended relationship, the third is one who thinks cavemen should only date cavewomen and the last is one who is the formers roomate who is dating a Homo sapien and thinks she is ashamed of him and won't let him meet her friends.
Everything works out in the end. While I did wind up laughing at some of the jokes I don't really see this becoming the new must see TV. I can't always tell what is going to be a hit. Friends is a perfect example. Their first show had me feeling that was a half an hour of my life I wouldn't get back. Still the show built and became one of the biggest hits of the 90's. This could happen to Cavemen or it could be gone in less then 13 weeks.
I think they would do better to take a lesson from the past instead of ignoring it or trying to change it like Bionic Woman did. What did I Dream of Jeannie, Mr. Ed and My Favorite Martian have in common? The person who was unusual was the only one. At least during the first season. The biggest thing of all that they had in common was that person had to hide that they were a Genie, a martian or that the horse could talk so they could fit into their society.
They could have had the caveman room with someone. He could have said he was their cousin from Europe or something like that. He would have to hide his extraordinary strength and different ways from the neighbors. Anyway that is how I would have produced the show.
Posted by Rick L. Phillips at 3:01 AM No comments:

Jack (Dodger) Wild and Mark (Oliver)Lester on a TV talk show. It looks to be sometime in the 1980's.

Posted by Rick L. Phillips at 5:21 PM No comments:

Iron Man and Hostess Cupcakes in A Dull Pain 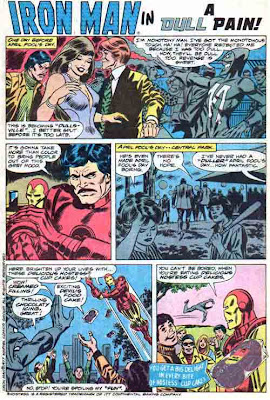 I know I forgot to post this yesterday. I had alot on my mind yesterday. So to make sure that it gets posted for the weekend I have posted it now. I have always noticed that they usually made up new and really dumb crooks for these ads. Why not make up ads where they fought the B rated crooks? Maybe they wouldn't have been as fun to read as the fans would have taken them more seriously. Anyway here is Iron Man and Hostess in A Dull Pain.
Posted by Rick L. Phillips at 5:06 AM No comments: