This is Tom Jones on DVD 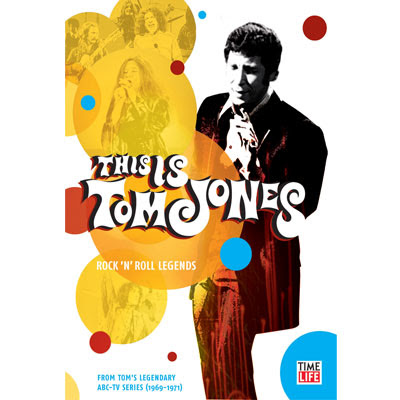 Earlier on this site I mentioned Tom Jones Variety series called This is Tom Jones. It was hit show where he had guest ranging from Peter Sellers to Herman’s Hermits to Edward G. Robinson. It was quite a popular show in the early 1970's and now Time Life has it available on DVD. You can get to their site to look it up if you click on the button below. It will be available in late may but you can preorder it now.

For God So Loved

Over time I have gotten e-mails from things I subscribe to and e-mails from family and friends that were to be uplifiting and to teach me things. I have put some on this pop culture blog On My Mind and may still put some there but now I will put some on at For God So Loved.
Stop by once in awhile and check out on or around Easter Sunday. I hope to have an original story on that site for Easter.
Posted by Rick L. Phillips at 3:01 AM No comments: 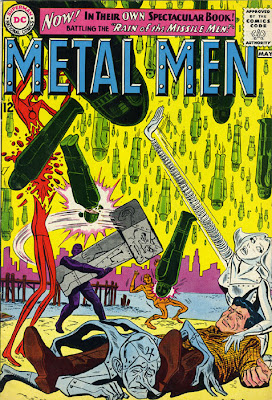 Everyone is talking about the possible Metal Men movie. Well we all know how this works. Get word of mouth going on the project before you sign a cast so it seems like there is interest and big stars will want to sign on for the film. Will there be a movie? I doubt it but I would be interested in seeing it if it does come out. Actually I would like to see a Metal Men cartoon series. I have always thought they were taylormade for the cartoons. Maybe Cartoon Network will do one if the movie is a hit.
I wonder what stars would sign on to have their faces hidden under the metal? As far as who will play Doc Magnus I would like to suggest Kurt Russell. Anyway that is my 2 cents on the subject.
Posted by Rick L. Phillips at 7:06 AM No comments:

This Day in Music History: The Beatles and Can't Buy Me Love (43rd record setting anniversary) 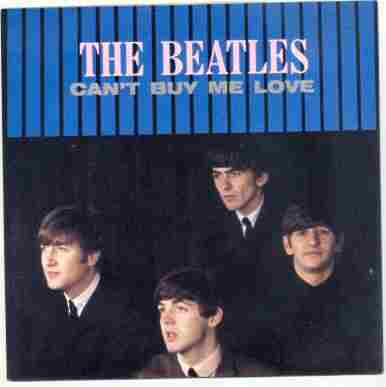 When you of great Beatles songs you think of "Something", "Yesterday", "In My Life" or "The Long and Winding Road." However, there is another song that deserves to be mentioned on the list of great Beatles songs. That song is "Can't Buy Me Love." What is so great about this song? Isn't it just a nice little pop tune? Actually, it has one big thing that would make it added to the list of great Beatle songs. It was #1 on this day in music history, April 4, 1964 when the Beatles set a record that has never been broken. That week the Beatles estabilished the biggest domination of the top 5 in the history of the Billboard charts. What helped this happen was when Capitol records made the Beatles a hit in America other smaller labels, like Swan and Tollie, who held the American rights to their other songs jumped on the band wagon by releasing them. So the top 5 this week was held by the songs as follows.
1. Can't Buy Me Love
2. Twist and Shout
3. She Loves You
4. I Want to Hold Your Hand
5. Please Please Me

It also helped the Beatles set other records. One was the greatest monolopy of the top 100. By April 11 they had 13 songs in the top 100. Can't Buy Me Love also achieved the biggest leap to number 1. It debuted at #27 and the next week it was #1. The song helped the Beatles achieve the most consecutive number one singles. Ath the time the record was held by Elvis with 2 consecutive #1's but the Beatles had 3 with IWant to Hold Your Hand, She Loves You, and then Can't Buy Me Love. With all this the last record it set should come as no surprise being largest advance sales. The song was not available on any album at that time. Capitol records only released it as a single. So the sales # of 2,100,000 should not have surprised anyone. With all it achievedfor the Beatles it should be considered their greatest song of all.
Posted by Rick L. Phillips at 9:06 AM No comments:

Lose Weight with help from Ayds!


Yes this diet candy was sold for years to help people lose weight. It sold very well but once the Aids virus start this product was doomed. I think they stoped making this product then. Perhaps they just changed the name.
Posted by Rick L. Phillips at 3:01 AM No comments: 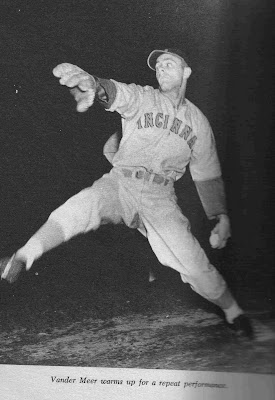 Today is Opening Day for the baseball season. My favorites and my home town team, the Cincinnati Reds, have always been the team to open the season by playing the first game of the season. In past years other teams have tried to sneak in the day before or even a few hours of minutes before to claim that they played the opening game that year. Those teams need to get back to the real world. No matter what the baseball season doesn’t start till the Cincinnati Reds play their first game. It is a long standing tradition. Today I want to tell you about an old Cincinnati Reds pitcher. His name was Johnny Vander Meer. Vander Meer was from Midland Park, New Jersey. Most people there were Brooklyn Dodger fans. On June 15, 1938 some of them for a brief time became Cincinnati Reds fans. Five days earlier Vander Meer had beaten Boston, then known as the Boston Bees 3-0. He was a rookie and pitched a no-hitter. His second game was against the Brooklyn Dodgers. History was about to be made. A crowd of over 500 people were there that night and it included Johnny’s parents. The game was going well for Vander Meer and by the fourth inning the Reds were leading 4-0. By the 6th inning no Dodger had gotten farther then 2nd Base. Even faithful Dodger fans were starting to root for the Reds and the rookie pitcher as he was on the verge of pitching a second no-hitter in a row. That would be a feat that no one had ever done up to that time. During the 7th inning he walked the first two batters and the fans switched back to the Dodgers. Johnny worked his way out of the situation.
In the 8th inning he struck out Woody English. The second batter grounded out. Then the third batter was struck out. When the 9th inning of the game came and Johnny walked out to the mound the crowd gave him an ovation. Vander Meer and the crowd was starting to feel the tension. Every pitch created a sense of excitement in the air. The first batter hit the ball up the first base line. Johnny fielded it himself and tagged the runner out. Babe Phelps the catcher was up at bat. A record was on the line and the young Cincinnati pitcher walked him but Phelps was a slow runner and was taken out for a pinch runner. Despite his best efforts Vander Meer could not get the ball over the plate and walked the next two batters. Now the bases were loaded. The fans were on the edge of their seats and despite the late hour all the fans stayed to see if history would be made as they hoped. Everyone hoped except the Dodgers themselves. Dodger center fielder Ernie Koy hit a grounder up the 3rd base line. It could have been a double play to end the game but the 3rd baseman was cautious and threw slowly to home plate to get the out but by that time Koy was on first base. 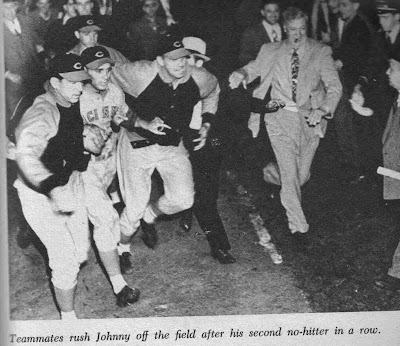 Shortstop Leo Durocher he was considered a weak hitter but would come through under pressure. The crowd leapt to its feet when he hit the first pitch like a shot down the first base line. However, it curved foul and went into the stands.
Durocher stepped back to the plate. Johnny let loose with a fast ball and Durocher hit it to center field. Reds outfielder Harry Craft was there and caught the ball to end the game. Vander Meer had put the Dodgers away with a score of 6-0. When he completed this incredible feat he earned a nickname as Johnny “Double No-Hit.” 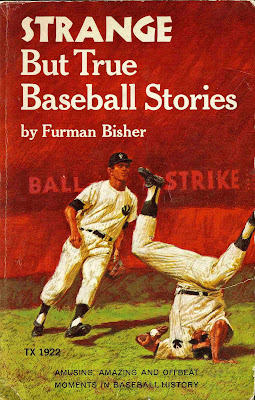 I found this to be a very interesting story. The first time I read it was in the book “Strange But True Baseball Stories” by Furman Bisher. It was published by Scholastic Book Services in 1972.
Posted by Rick L. Phillips at 3:01 AM No comments:

Just wanted to say Happy April Fool's Day! Oh! Your shoes untied. Ha! Made you look.
Posted by Rick L. Phillips at 9:04 AM No comments:

This Day In Music History and The Bangles and Eternal Flame 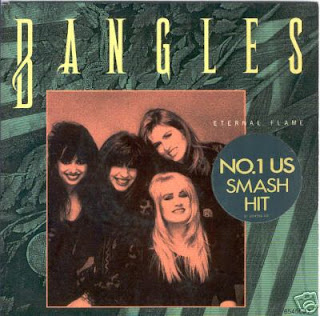 Songwriter Billy Steinberg had been a fan of the Bangles since their first album. After a Bangles concert Billy met with Susanna Hoffs and she agreed to write with him and his other writing partner Tom Kelly. After their first time of writing together none of the songs were recorded but a relationship was established. Later their first recorded effort was done not by the Bangles but by Belinda Carlisle on her first solo album self-titled Belinda. The song she chose was called "I Need a Disguise."
When they wrote "Eternal Flame" Tom and Billy said they wanted to write something that sounded like a Beatles melody. Susanna is a fan of 60's music and loves groups like the Beatles, The Monkees and the Byrds. Billy said that "Eternal Flame" to him sounds like the Beatles meet the Byrds.
The inspiration for the song was part of the eternal flame that burned in Graceland for Elvis and a childhood memory of Susanna's from when her sunday school class was showed a red light that they were told was called the eternal flame.
The song almost didn't make the final cut for the new album. Most of the songs were geared to sounding like a rock and roll garage band as the group wanted to show off thier songwriting and musicianship skills. Suddenly here is the beautiful ballad and it needed a different production style.
The first single from the album was "In Your Room" and it peaked at #5. "Eternal Flame" was the follow up and on this day in music history it reached #1 on the Billboard charts for 1 week. After this the group said they were going on hiatus. Not long afterward the hiatus was officially announced that it was really a break up.
You can click on the You Tube link below to view the music video.

Posted by Rick L. Phillips at 3:18 AM No comments:

While searcing the internet for Black Lightning material I came across this book. I have not read the book myself as this is the first time I have seen it. From what I have read the story line is pretty good and it revolves around a monster that inhabits a construction site. This is a reprinting of Green Arrow issues 26-31. I thought Black Lightning would be a co-star in the adventure but as it turns out it is only a cameo. If you are interested in the book You can go here if you wish to buy Green Arrow Straight Shooter