Thor and Hostess In the storm meets its Master 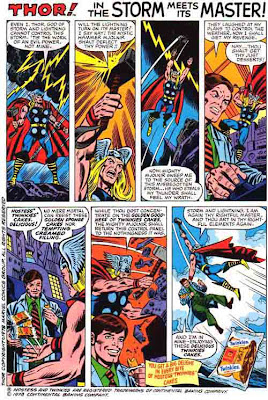 It's Saturday and time for Hostess commercial starring Thor!
Posted by Rick L. Phillips at 7:31 AM 1 comment: 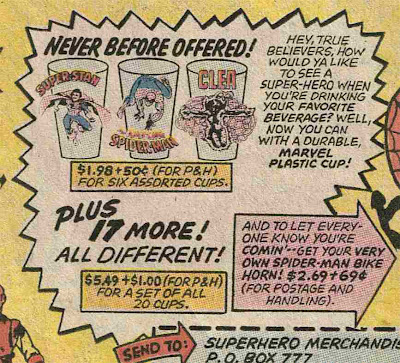 By the late 1960's Stan Lee had become a celebrity and was being asked for personal apperances and his autograph. By 1976 he was starting to surpass himself as he was on his way to becoming a Marvel icon as Super Stan. Take a look at this 1976 ad for cups from Superhero Merchandise. The cup on the far left is that of Stan the Man Lee as Super Stan. I tried to find another photo of it close up but this is the only one I could find. When was Dr. Stranges sidekick Cela so big that she could get her own cup?
Posted by Rick L. Phillips at 1:02 AM 1 comment: 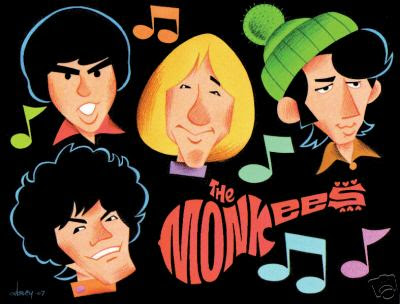 For those of you who love comic and cartoon art here is a wonderful site by artist Patrick Owsley. The above art of the Monkees is one of his. I love the Monkees too Partrick. You can go to it by click here and get the art above if you click here to go to E-bay.
Posted by Rick L. Phillips at 3:01 AM No comments:

If you want to become a member of S.O.M.E. and like to make logos then here is how. Submit a logo for this site and I will use it for a month if I like it. However it must contain the Monkees. After all this is for Society Of Monkees Enthusiasts . So e-mail your submissions and I will look at them. Thanks.
Posted by Rick L. Phillips at 3:01 AM No comments: 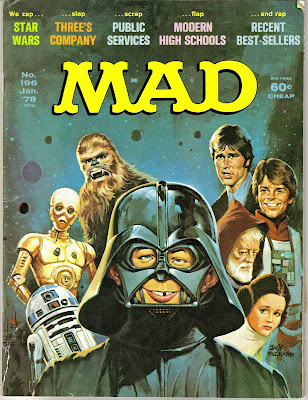 I recently found this and forgot I had it. As this year is the 30th anniversary of the release of the first Star Wars film I thought you might like to see the cover of this 1978 issue of Mad. As you can see on the inside they have fun with Three's Company. Usually the artist of this magazine are able to do wonderful caricatures of celebrities but for some reason they can't seem to get John Ritter right. At times he looked ok but usually it didn't look like John Ritter to me. One that they did get right was Henry Winkler who they used as their Mad interviewer of a ghost writer. I always loved Mad but I don't see it for sale much these days.
Posted by Rick L. Phillips at 2:25 PM No comments: