Hostess and Captain America in When It Rains It Pours 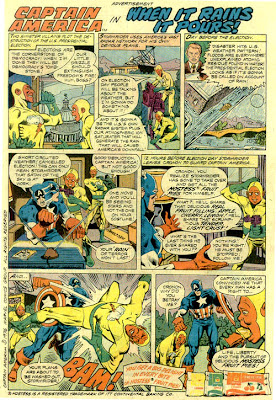 Another Saturday morning and here are some Hostess. I don't have money cause I haven't been paid. Well ok the song doesn't go that way but here is another adventure with Hostess and Captain America in When It Rains It Pours.

Posted by Rick L. Phillips at 8:46 AM No comments:

Well I got to see the pilot episodes of two shows I have been looking forward to seeing in the new television season. While I enjoyed both one was better then the other and both made me think that NBC was trying to get back their glory days of old.

First up is Chuck. The Executive Producer is McG who directed the Charlie's Angels film. Chuck is a former engineering student who had his girlfriend stolen from him by his old roommate Bryce. This took away almost all of his confidence. Now he works for Buy More as part of their Nerd Herd. Bryce went on to become a government agent and is killed while protecting government secrets. Before he dies he sends the sceret in an e-mail to Chuck. Chuck gets in on his birthday and thinks it is a greeting and opens it. It transfixes him and all night long the images download into his brain. Later two government agents find him and battle over who has the right to the information that he holds. One of them is the beautiful ex-girlfriend of Bryce. Not the one from college they broke up earlier. Chuck helps them stop an assination and since he holds the information they want he tells he will help them on his terms.

This show is suppose to be an action comedy. McG did the action very well. While I did see some comedy it wasn't there as often. For this to be a hit as an action comedy the comedy needs as much time as the action. Hopefully they will be on an even level as the series goes on.

When Chuck and the female agent were together I could only think of Don Adams and Barbara Feldon of Get Smart and the other half of the plot reminded me of the Disney movie the Computer Wore Tennis Shoes. As NBC aired the Wonderful World of Disney the first airing of that movie was on NBC in two parts on that show.

Next is the show Journeyman. It stars Kevin McKidd as Dan Vasser a reporter who on his wedding anniversary finds that he can travel back in time. However, it happens at random and he doesn't know how it happens. Dan goes back and finds his fiancé who he was engaged to before he dated his wife. His first fiancé died on 9/11 but he finds that she too can travel through time and she disappeared right before the plane crash. Dan's wife doesn't believe that he is a time traveler and that he is either having an affair or has a drug problem. His marriage is about to end but on one trip Dan burys his wedding anniversary gift to his wife. When he comes back he digs it up and his wife believes him. There is another story that shows Dan trying to save a man who he keeps meeting when he travels back in time but that has a surprise ending. So I will leave that for those to enjoy if they have not seen the show yet.
This time travel show was my favorite between the two. It reminded me of Quantum Leap only the star gets to see his wife more often and there is no holographic friend following him around.
I don't know if they did it on purpose, if so NBC has two pretty good shows to celebrate their wonder years 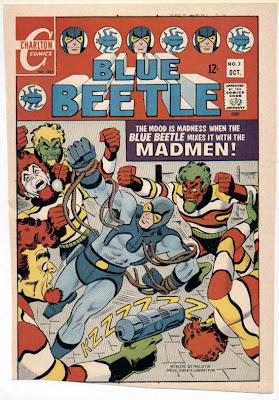 If you are a fan of Steve Ditko art then you should look at this e-bay auction. It is a proof of Blue Beetle #3 from Charlton Comics. They used it when they were producing the book according to what the auction says.
Posted by Rick L. Phillips at 3:01 AM No comments: 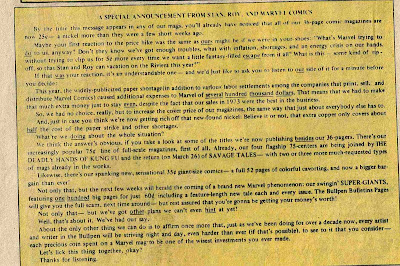 No this is not becoming a pay site. I saw this in a Marvel comic book from 1974. The price of their books ad went up by 5 cents. They went up from 20 cents to 25 cents. Marvel showed that they had a lot of respect for the intelligence of their readers. At this time many still thought that comic books were just throw away kiddie literature. But Marvel knew that kids were saving every penny to buy their books so a 5 cent price hike was a lot of money to them. If you click on it and you read the announcement above you will see how Marvel gave us one of our first lessons in economics.
Posted by Rick L. Phillips at 3:01 AM No comments:

For those of you who have not read the Aquaman Shrine you are missing out on a fun site dedicated to the one JLA member who has always been wrongly accused of being boring. Rob's love for the character shines through and the site is a great way to show that love for his favorite character. Over the past few months he has created his own cover art for his version of the Aquaman team up book Surf and Turf. His plot is a time travel one that includes all the original members of the JLA. So go to Aquaman Shrine and let him know On My Mind sent you.
Posted by Rick L. Phillips at 3:50 AM No comments:

The Salvation Army Band and the Lily of the Valley 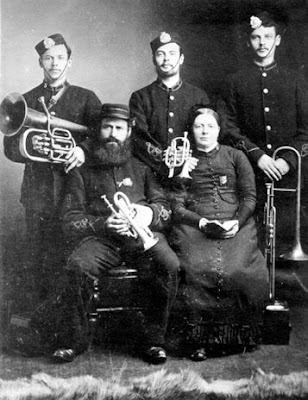 Christianity flourished during England's Victorian Era. As a result concern for the orphans, the poor, the homeless and those beaten by the rise of the Industrial Revolution were on the rise. One man was determined to help as many of them as he could.
William Booth became a Christian when he was a teenager. He began witnessing to others and winning them to Christ. He moved to London to be come a pawnbroker but changed careers and became a Methodist evangelist. By 1865 his ministry was mainly dealing with the poor on the east side of London. Many nights he came home beaten, battered and bleeding.
In 1878 Mr. Booth started the Salvation Army. Many men, women and children left their old lives behind and enlisted in the army of the Lord. The movement spread through England and eventually the entire world.
That same year a group from the Salvation Army tried to set up a ministry in Salisbury, England. They were treated very badly. Every time they tried to preach they were hit with eggs and bricks.
Charles Fry, an amateur musician and layman in the Methodist church, lived in Salisbury. He saw how badly the people of the town treated the Salvation Army workers. He took himself and his three strong sons, who were also musicians, to the streets and acted as bodyguards for the Salvation Army workers. They showed up with their weapons of two cornets, a trombone and a tuba. Not only did they fight off the more unruly members of the town but their music drew a crowd for the preachers. And so was born the Salvation Army Brass Band.
In 1881 Charles Fry wrote the hymn "Lily of the Valley". It was published on December 29th 1881 in the Salvation Army magazine The War Cry. In August of the following year Charles Fry died. On his grave was inscribed another verse that he had written.
The former things are past, and ended is the strife,
I'm save home at last! I live an endless life!
Charles Fry is pictured with his family in the photo above.
If you like to read the histroy of how some of you favortie Gospel music was created you can see some more like this at For God So Loved.
Posted by Rick L. Phillips at 6:52 AM No comments: 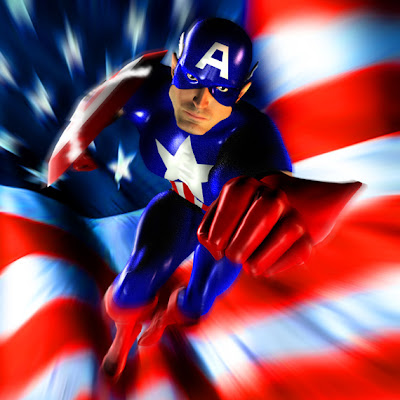 I just wanted to tell everyone to have a happy Labor Day.
Posted by Rick L. Phillips at 3:01 AM No comments:


Ok here is another Jan and Dean video singing their big hit Surf City. Where did this video come from? Does anyone know if they were the stars of a bad beach film or somthing?
Posted by Rick L. Phillips at 3:01 AM No comments:

Here is a video of Jan and Dean singing a song I have never heard called White Tennis Sneakers.

Get a look at how they are dressed. I am not very fashion minded but I don't think I could have gone on television dressed like that.