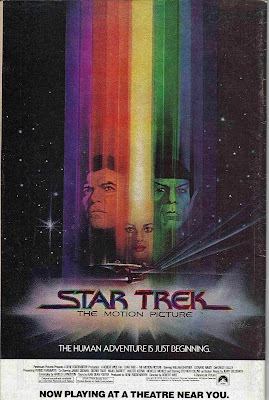 I saw an early episode of Star Trek the Original Series this morning and it put me in a Star Trek mood. So here is an ad for the first Star Trek movie. The movie didn't live up to how good the ad is but it did start a really good movie series.
Posted by Rick L. Phillips at 3:01 AM No comments:

When I was very young my parents would take me to the drive-in theaters to see some of the family movies that were made at that time. Mostly they were Disney and Western films. Usually they were double billed with another movie that was produced by the same company. Once in awhile they would feature another movie from different company. One of those was Superargo. Superargo was a wrestler and at that time many of them were being made into movie stars. They pretty much played themselved but they were treated like they were superheroes. Why not? Afterall they were dressed like superheroes. At that time I felt that it was pretty awful. I still do. If you watch the clip of the end of the movie above you will see a chase scene in the woods. The villain dies in quicksand. Where are these woods that has quicksand? During the movie I remember as he walked away my Mom remarked that he was pigeon-toed! That remark and Superargo himself are the best memories I have of the film.

I thought of waiting till tomorrow to post this video from you tube but I was so excited to share it that I couldn't wait.

A Relaxing Moment with Superman and Batman 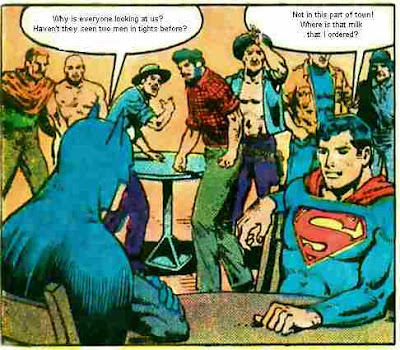 Here,from a post I have on Mail It To Team Up,is a panel where you can fill in the blank. Sorry if the words are so small that you have to zoom in to read them. When I tried to make them bigger they just would not fit.
You can find things like this, old team up comic book ads and team-up comic book reviews at Mail It To Team Up.
Posted by Rick L. Phillips at 3:01 AM No comments:


Another artist who saw the chance that music videos had to become a new art from mixing musicals with drama was Michael Jackson. Everyone has seen the video before but I bet you never saw this one here is Thriller done with...Legos.
Posted by Rick L. Phillips at 3:01 AM No comments:

Music videos as an art form peaked early. They could have brought back the age of the musicals. David Bowie saw this and brought it to MTV in the from of the video for Jazzin' for Blue Jeans in 1984. Another video artist who's video has been done to "death" also saw this as a possibility in the 1980's we will show that here tomorrow and with a twist. Till them look at this two part video, probably the last time a video was so long it has to be in two parts, and enjoy.
Posted by Rick L. Phillips at 3:01 AM No comments:

I found this Marvel Two-In-One fan page awhile ago and thought I would share it with all you team up fans here. The above ad I got from their site. I never saw it in any book when I bought comics back then but the site owner says he got it from an issue of the Fantastic Four. To see the exact issue you will have to go there to find out. The site is right here.
Posted by Rick L. Phillips at 3:01 AM No comments: